Here is what visitor who love animals say about the Special Memories Zoo where big cats are kept in corn crib styled bird cages: 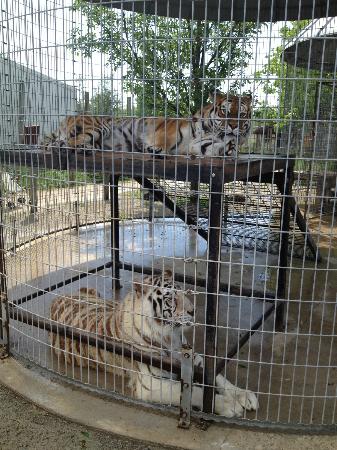 We went in early August and found the entire experience pretty depressing. I am not an animal expert, but can safely say there is little to no attempt to replicate their natural environments. The cages were small, the water provided to them looked dirty and stinky. The big animals were especially sad. There was a tiger in a small cage that paced back and forth the entire time we were there.

I can’t in good conscience ever go back and support this zoo.
Visited August 2014

This zoo is a big waste of money. Plus the animals look so incredibly sad with very little room to roam, and have no shade in the heat of summer. The zoo has signs all over saying they are approved by state laws and everything is the way it is supposed to be (ummm…?! Why even need to say this?). Zoo is stinky and dirty and not well maintained. Feeling very sad since leaving the zoo and will not be returning. HIGHLY recommend the NEW Zoo in Green Bay.
Visited June 2014

I came here with my son’s 1st grade class, and can say this zoo is the worst ever. The only good thing about this zoo was the playground. All the kids preferred the playground over looking at the animals. And here’s why:

1. The place is not very well maintained. It stunk like pee and very grassy.
2. The animals looked depressed as they’re all caged in small cages, even the lions and tigers.
3. There are signs that say the cages were inspected by the government and are approved (what zoo does that?).
4. The train ride was soooo boring. The guide, Gretchen stopped every couple feet to bang on the animal cages so they would wake up and run around. While it’s nice to see them run around, it wasn’t necessary.

That said, I’m certainly surprised to see more good reviews than bad. I think this place really needs to work on their cleanliness and provide more space for their bigger animals such as lions, tigers, bears, camel and zebra to run around and play. It’s really sad to see how depressed they looked. If you’re in town and want visit a zoo, I recommend The NEW Zoo in Green Bay.
Visited June 2014

First off, I am NOT a PETA person. we actually own a farm and we know that those organizations exaggerate and try to get people worked up about nothing. However, I felt uncomfortable at this zoo as the animals seemed miserable. Our cows have shade,heavy duty fans, even sprinklers, plus thousands of square feet they have access to at any time, and food and water available 24/7. These poor animals live in very small quarters. It would be like someone owning a dog and keeping it in a small kennel all day (yes I know some people do this, but it doesn’t mean it’s kind). The day we went the train was running every 30 minutes do to field trips. The gal driving the train (Gretchen) would bang on the cages, telling the animals to wake up. The poor woodchucks… one just wanted to sit on his perch away from the others. She banged around until he got down. One of the other two he was clearly trying to avoid was pissed and chased and bit at him until he went back his perch. I didn’t understand why a resting animal would be rousted every 30 minutes to fight with another animal just to ‘entertain’ us. I’m sure to some I sound overly concerned as I think people who leave their dog tied outside on a short chain without water or attention are cruel too… but I don’t know any farmer who would ever treat their animals the way this zoo does or the way some people treat their pets (not most ,but some).
Visited May 2014

This is a nice little zoo with a cute playground for younger children. My only concern was that the animals (especially lions and tigers) were in such a small area, and to be frank, did not look happy. There are even signs on certain animals explaining why they “cry”. A little bit sad.
And the animals are very close. Silly, but it made me a little uncomfortable.

But my 2 year old enjoyed the playground and petting zoo.
Visited August 2012

Go to a facility better equipped to handle animals. This place should be shut down. All of the animals seemed entirely miserable.

Went there with a group. Lots of animals in small enclosures with nothing but cages & concrete slabs. Very few enrichment opportunities for animals. Went on hot/humid day. Water was minimal provided to animals. Petting zoo included a badger, fox, some kind of wild cat and baby zebra… really? This is what these animals are in the world for? Reptiles were housed in a garage with rocks on top of aquariums and signs that say don’t lift lids. Obviously somebody’s home collection of exotic animals. Would not support this kind of treatment of animals. Complaint with DNR will be filed.
Visited August 2012

The USDA had some pretty serious citations against Gene Wheeler’s Special Memories Zoo as well: