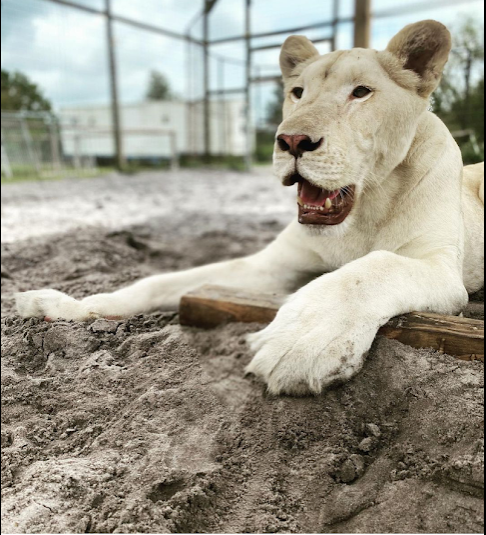 So, now that the movie is “out in the wild” where is Snowball the white lion cub? We put our best researcher on the trail and this is what they found:

After extensive research, I suspect that the cub used in this film was a lioness named Shaka*. She was most likely bred by the infamous Mario Tabraue at ZWF Miami in October 2018, was used for filming in Georgia that December, and was then passed around by several backyard facilities in FL before ultimately ending up with Felicia Frisco and her traveling fair act. Here’s Shaka now, from Felicia Frisco’s Instagram feed:

*There is conflicting information about the movie cub’s name — two social media posts by film crew referred to the cub as “Nala,” while others called her “Shaka.” I can’t rule out the possibility that multiple cubs were used to play Snowball, which is common in the film industry, but I never found any signs of more than one cub on set at once. I also couldn’t find any other records of a white lion cub named Nala which would have been the correct age to match the movie cub, but I did find a cub named Shaka who fit all the criteria. Plus, the cub’s whisker spots (which are unique to each cat and can be used for identification) and ear notches look the same on all the on-set images I could find, regardless of the name given to the cub, strongly suggesting that “Nala” and “Shaka” were the same animal.

Based on social media photos and posts, I was able to piece together a rough timeline of Shaka’s life.

The first thing we know is that the animal wrangler for this film was Tracy Oliver, the partner and widow of Sid Yost, who passed away last year from pancreatic cancer. As far as I can tell, Oliver doesn’t own exotic animals anymore, but does occasionally still broker/work with big cats provided by others if a studio requests them from her agency, Top Dog Talent. It would appear that Yost had already lost his USDA license at the time of this cub’s use in the film.

This screenshot posted by Oliver was originally taken on the set of the film on December 15, 2018 (a date corroborated by another photo an actor posted two days later). Oliver said on Facebook that the cub was 9 weeks old at the time and belonged to an unnamed “friend in Florida,” meaning that the cub would have been born mid-October 2018. Sure enough, Mario Tabraue’s ZWF Miami, who we believe speed-breeds cubs like nobody’s business, had multiple white lions born on October 20th, and was advertising white lion cub pay-to-play sessions two weeks later.

It’s completely possible that the newborn Shaka is pictured below, after having been taken from her mother. And these two posts were of completely different litters just one month apart, so a LOT of breeding is happening at Mario Tabraue’s Zoological Wildlife Foundation (ZWF).

Ironically, the villains in Lena and Snowball are criminals trying to steal the white lion cub so they can sell it to a trophy hunter. And guess how ZWF established its white lion breeding factory? Yep, by “rescuing” (buying) young white lions from canned hunting farms in South Africa, then using them as breeding stock to churn out cubs for profit. Without the canned hunting industry, the real-life cub that played “Snowball” wouldn’t have existed, so this film is indirectly supporting the very thing it preaches against.

Anyway, based on cast/crew social media posts, the nine-week-old Shaka was on-set in Fitzgerald, GA until mid-December. Just one week after that, she appears to have bounced around multiple backyard menageries in Florida. Tracking her down was difficult, but I was able to find a few more clues on social media. First, this post by an actor who joked that the cub was his pet, but that it soon had to be sent back to a “sanctuary” called Wild at Heart in Okeechobee, Florida. This is the facility formerly owned by Sue Pearce before she lost her USDA license, and is currently operated by Jamie and Jeremy Hargett of Cold Blooded Inc.

Wild at Heart does have a few lions and tigers, but the only evidence I could find of a white lion named Shaka was a photo by Jamie Hargett of what appears to be the same lion cub in their living room, and another post mentioning that Shaka is “our lion we own with 2 friends.” I believe that both photos were taken in 2018 but were posted much later.

There is no other evidence that the cub actually lived at Wild at Heart despite the Hargett’s claimed partial ownership. To figure out where the cub actually lived, and who the other “friends” were, I found a newer post by Tracy Oliver of the same on-set cub photo, this time with a description asking for someone named David to update her on how the lion was doing:

The “David” in this post is David Weathers, an alligator wrestler/snake handler who is currently working for fairground bear trainer Dexter Osborn. According to business filing records, Weathers is also listed as a chairman for Wild at Heart and Director of Octagon Sequence of Eight, a pseudo-sanctuary formerly(?) operated by notorious abuser Lancelot Kollman Ramos, who had his USDA license revoked in 2009 for severe animal abuse and neglect. Since then, Ramos and Octagon have repeatedly been penalized by the USDA for continuing to illegally exhibit and sell big cats without a license. Octagon was named in this judicial decision stating that “The gravity of his violations of the Animal Welfare Act and the Regulations and Standards is great. Lancelot Kollman Ramos knowingly operated as a dealer without a valid Animal Welfare Act license. Lancelot Kollman Ramos caused injuries to two lions that resulted in the death of one of the lions and lied to investigators about his actions. Lancelot Kollman Ramos has a history of previous violations of the Animal Welfare Act and the Regulations and Standards.”

Weathers and Osborn are currently in the process of turning Osborn’s backyard compound in Naples into a pseudo-sanctuary called “Grizzly Ranch and FL Black Bear Rescue.” On December 24, 2018, just two weeks after the cub was last seen on set in GA, FL exotic animal enthusiast “Blake’s Wildlife Ranch” uploaded a video of him manhandling Shaka the lion cub at Dexter Osborn’s backyard facility after being introduced by another “buddy,” Birds and Exotics of the World. The video shows poor Shaka growling, squirming, and trying to run away as Blake continues to chase and grab her. At one point in the video, when Shaka tries to squirm away, Blake grabs her roughly by the scruff of the neck as she snarls and growls, telling the viewers that “you’ve gotta show ’em who’s boss. They’re lions, they get grabbed a lot.” A gunshot is heard in the background while he explains this. At 2:30 in the video, Blake says that “she was used as an ambassador in movies” while continuing to harass the poor cub. A later Facebook post by one of Weathers’ relatives described Shaka as “David and Dexter’s white lion cub.”

From late December 2018 through January 2019, multiple Facebook posts by David Weathers show Shaka in Osborn’s house and backyard. The smoking gun is that the ZWF is tagged in most of these posts, adding more evidence that they were the breeder. The posts also provide solid proof that this is the exact same “Shaka” used in the movie, because not only is this cub the right age, but her whisker spots are a perfect match with the on-set photos: the top row has a slightly darker spot which forms a triangle with the two spots below it, followed by a blank space and then 2 more spots.

Around February 7, 2019, Shaka was sold/transferred to Felicia Frisco, who is currently treating the lion like a pet and social media prop while training her to do tricks in the Frisco family’s “Tiger Encounter” traveling fairground show, which has started advertising its “rare white lion” to fairs.
David Weathers’ Facebook post from that date is the last time Shaka is seen on any social media affiliated with Dexter Osborn/David Weathers, and it shows the cub “meeting her new partner in crime,” a white tiger cub whose name is given in the hashtags as Samasta, known to be owned by Frisco. From that point on, all social media posts of Shaka the white lion have been on Felicia Frisco’s accounts, save for one from May 23, 2019, by Birds & Exotics thanking her for “doing a great job caring and training Shaka the white lion” and another from March 31, 2020 by Blake’s Exotic Animal Ranch re-visiting Shaka at the Frisco’s compound.
By summer  2019,Shaka was already making appearances at county fairs.

And these photos and screenshots I collected earlier while researching the “Tiger Encounter” show just how much respect the Frisco family has for big cats:

Shaka has consistently appeared on Felicia’s Instagram and TikTok accounts from February 2019 to present. While she appears to be in decent physical condition and I’ve found nothing to suggest deliberate abuse, Felicia Frisco “loves” her so much that she consistently fails to respect her as a wild animal. Felicia has become obsessed with the amount of followers she can get on TikTok by showing off her pet big cats, and is constantly posting videos of herself doing incredibly stupid things around Shaka in an attempt to go viral, like doing silly dances in front of the lion, letting Shaka eat raw meat out of her mouth, or setting off a loud confetti cannon right next to her to “celebrate” 1 million followers. She’s used Shaka as an influencer prop to get product endorsements, and also uses her TikTok as a platform to bash concerned animal lovers who (rightfully) point out that what she’s doing is not conservation by arrogantly claiming that her years of experience and USDA license for her “educational program” somehow justifies her exploitation of big cats. Unsurprisingly, most of Frisco’s teenage followers comment about how much they want to touch or own a big cat, too, which is a terrible example to set.

Here are a few of Felicia’s Shaka posts from the past few years:

So, that’s where “Snowball” is today — in a trailer for a traveling circus act, being used as an ego prop.

The small studio responsible for Lena and Snowball is called Almost Never Films, and they can be reached here or at  mike.zhou@almostneverfilms.com. They make mostly “uplifting” or faith-based movies and almost certainly didn’t intend to cause any harm, but it may be worth politely educating them about why it’s wrong to use big cats in movies or portray them as cuddly pets. Likewise, the writer/producer for the film, Werner Kienberger, can be contacted at  w.kienberger@kochmedia.com .

P.S.: I thought this one was pretty funny — Felicia Frisco apparently blames Carole Baskin personally for “trying to ruin her dating life.” She’s single and increasingly unhappy about her inability to get a boyfriend. Go figure!