A jury of his peers said Joe Exotic (Joseph Schreibvogel Maldonado Passage) is guilty of two counts of murder for hire and 17 wildlife trafficking violations that included shooting 5 tigers in the head when he needed to make space for circus tigers that would provide income from boarding. More than 64 million people saw the Netflix version of Joe’s guilt, but that was nothing like the actual trial or evidence provided.  Just ask the jurors who actually heard days of testimony and evidence, like this one who said, “Actually, with the FBI agent, we could have convicted him on both counts of that (murder for hire) just based on that one recording because he (Joe Exotic) had said that the first guy he hired to kill her had run off with his money so he wanted to try again.”

She went on to say that there was nothing shown in Tiger King, Murder, Mayhem and Madness that would give her pause, saying, “I’m confident we made the right decision.”  Kristen went on to say that all of the jurors were in total agreement with only one exception, temporarily, where one juror wasn’t sure if Joe should be convicted of both illegally selling tiger cubs and falsifying the documents of those sales, but she conceded in the end that he should be convicted on both.  When asked if the Joe Exotic in Tiger King was the same person she saw at trial, her response was that she had a front row seat to seeing that he wasn’t very good at fake crying.

“The jury wouldn’t have convicted him based on what the average viewer saw (in Tiger King) so it’s easy to feel sorry for him, but they didn’t get to see what we saw, they didn’t get to hear the recordings, and just all of the videos that they showed of his hatred for her (Carole Baskin) and I think that if they had seen more they could understand more,” stated the juror.  She went on to say she thinks the 22 year sentence was fair, or maybe that he should have been given more time.  When asked if she thought Jeff Lowe set Joe Exotic up the juror said, “Joe tried to say that he (Jeff Lowe) was the reason that he hired Alan and that he was the go between and that he was the one that got him this fake ID and this burner phone and all these different things when the actual documents that we saw showed that Joe did it.”

Joe keeps telling the press that he has cancer and seems to think this should get him a Get Out of Jail free card, but this evidence was presented at his trial: 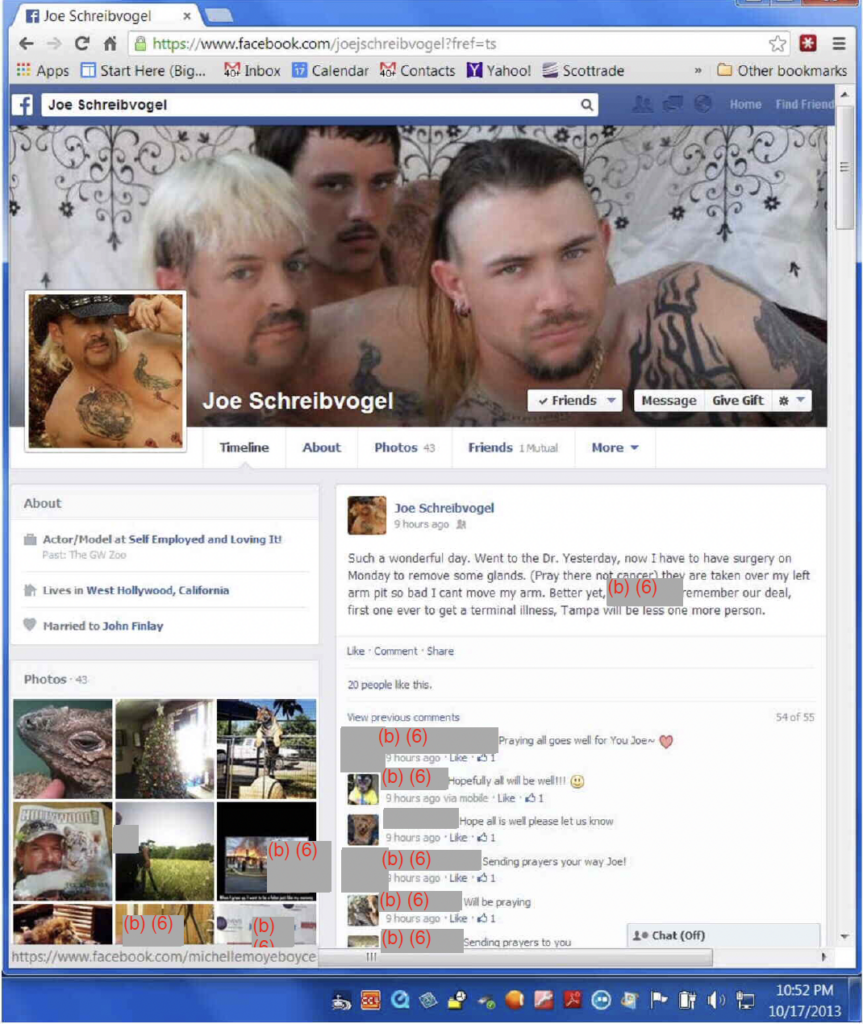 Joe was referring to a deal he reportedly made with Janice Haley implying that their deal was to kill Carole Baskin if either of them came up terminal.

Joe keeps telling the press that he shot the five tigers in the head because he had to euthanize them for limping, but if you read the transcript from the first day of the trial and scroll down to page 186 you will see Joe’s own vet, Dr. Green, saying that limping does not constitute an emergency euthanasia by Joe via gunshot.  She had mentioned earlier, that she felt Joe had done the right thing by shooting and killing one of his tigers who had escaped previous to all of this, due to the danger it posed to the park visitors.  Dr. Green states in her testimony that Joe never reported the limping of these five tigers to her and that even if he had, that she would not have condoned shooting them.

On day four of the trial, page 783 of the transcript refers to a 47 minute long recording (labeled 63 but not publicly available) between the undercover FBI agent, Joe Exotic and James Garrettson.  It goes on for a few pages and Joe negotiates a price, tells the UC FBI the best places to murder Carole Baskin and then on page 793 says, “Just, like, follow her into a parking lot and just cap her.”

Prosecutor asks:  What does it mean to cap someone?

Prosecutor asks: And then he says, “Just drive off.”

Prosecutor asks:. What did you understand that proposal to be?

UC FBI Agent responds:  His suggestion was that I follow her into a public place, pull a vehicle up on her or next to her and shoot her and then drive off.

I believe anyone who reads the entire trial transcript and checks out the evidence will come to the same conclusion that a jury of Joe’s peers came to.  Further, I think they would also agree with the 22 year sentence handed down by the trial judge.  I think it’s very telling that not one person in Joe’s family or social circle showed up to speak on his behalf or as a character witness; not even his own mother.  That should tell you everything you need to know about who Joe Exotic really is.  Only those who based their decisions entirely off watching a TV show failed to come to the same conclusion.