After getting a number of impassioned pleas like this:  “Jugomaro is a farm in Groblersdal that is in financial stress.  Now the police are invading their land and busy shooting the animals.” we were finally able to locate someone there who appears to know what is happening.

This is their report:

1.       Jugomaro has been in financial difficulties for almost 2 years.  Last year they said that they were going to lose their cats unless they could find something like R4,5m to pay the bank.  They were asked at that stage if they would be willing for good homes to be found for their cats.  They refused.  Somehow they raised some money and at the time Fernandes Snr was on record as saying that he had more tigers on order. 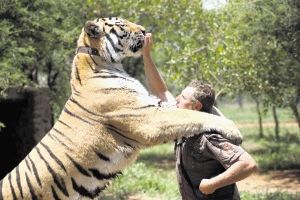 2.       Apparently they did not make good on certain agreements with the bank and have gone into liquidation.  There is paperwork signed by Jugomaro to the effect that the cats will form part of the assets.
3.       The cats have been sold and the liquidators arrived on Wednesday with a wildlife transport service and darted the animals before loading them on the trucks.
4.       No cat was shot and the police did not have anything to do with the situation except when they were called in to check that there were movement permits in place.
5.       Fernandez made an urgent application to the court on Wednesday night to keep the animals and is on a begging spree again.  At 2am yesterday morning there was an agreement reached to let the cats stay temporarily at Jugomaro while lawyers are sorting certain issues out.  The cats have all been inspected by a vet yesterday and found to be in good health.

What the long term future is for these cats who knows.  I cannot see how Jugomaro can dig themselves out of the hole this time.  This is evidence yet again that people should not be allowed to keep big cats.  Fernandez went on a buying spree for tigers as he thought “they were cool”.  He has lions as well.  The story they give out is that all the animals were rescued from certain death, forgetting that he has bragged about having tigers on order.  I am surprised that there hasn’t been an incident there.  They have fully grown tigers being bottle fed by members of the public!