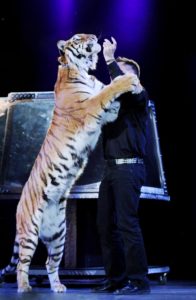 Mr. Owenhouse, from Bozeman, Montana, is a prominent, award-winning illusionist who has owned and used tigers in his magic act for the past 25 years. He bills himself as “the authentic illusionist” and feels that live tigers are an integral part of his “authenticity.”

Owenhouse was mentored in tiger-keeping by Rick Glassey, a now-retired animal trainer who raised and trained big cats to “perform” in movies, magic shows, and even a Broadway musical. He trained the tigers for popular illusionist Doug Henning, who was a major inspiration for Owenhouse (and most modern illusionists). Henning was one of the first illusionists to incorporate tigers into magic shows. He once said, “If I produce a 450-pound Bengal tiger, it’s going to create a lot more wonder than if I produce a rabbit.” Incidentally, Henning’s tigers escaped backstage on multiple occasions.

According to this article, “once a Bengal tiger got loose backstage at NBC and chased [talk show host] Tom Snyder into the bathroom; another time, another tiger ate up 27 of Henning’s 30 prop animals.”  https://www.washingtonpost.com/archive/lifestyle/1982/06/09/the-spellbound-world-of-doug-henning/ca8255d5-2a74-425d-a874-d76373dacccc/

If I produce a 450-pound Bengal tiger, it’s going to create a lot more wonder than if I produce a rabbit.
Read more at: http://www.brainyquote.com/quotes/quotes/d/doughennin697766.html
Mr. Glassey no longer owns any big cats, and I couldn’t find any allegations of abuse attached to him.

Jay Owenhouse’s first tiger was a male named Sherekhan, who was obtained as a cub in 1996. You can see a video of Sherekhan here.

Although the video is from 1998, the “tiger appearing in the cage” act is still a major part of Owenhouse’s show. After Sherekhan passed away in 2010, Owenhouse obtained his current cats from Doc Antle’s T.I.G.E.R.S: a pair of 4-month old littermates named Shekinah and Sheena. Sheena is an orange tiger and Shekinah is promoted as a “Royal White Tiger” who “likes to travel” and “loves to hug.” In this article, Owenhouse admits: “I really wanted a white tiger for a while, but we waited because the genetics have weakened. An offspring of two white tigers has an 80 percent chance of being orange, because white isn’t albino, it’s a recessive genetic trait.”  http://www.dodgeglobe.com/news/20160914/magic-runs-in-family and http://www.jayowenhouse.com/family.html

A lot of the advertising imagery Owenhouse uses focuses on the white tiger, which the magician claims is an ‘endangered species.’ Owenhouse’s official website claims: “Unfortunately there are only about 200 white tigers left in the world. White tigers are an Asian species which are found in the frozen tundra of the Soviet Far East and south to the humid jungles of Malaya.” In this news release, he talks about how “They haven’t seen a white tiger in the wild in 10 years. They discovered an isolated gene that’s started bringing them back.”  http://www.recordnet.com/entertainmentlife/20160615/dare-to-believe-imaginative-escape-artist-brings-sense-of-wonder-to-hope-show

Does he know that’s not true, or is he just believing what Doc Antle tells him?

What sets Owenhouse apart from other illusionists is that he treats his tigers more like “pets” than props. Here’s the scary part: the tigers were raised and housed by Owenhouse and his family in their suburban home and backyard, in a residential area less than half a mile away from a middle school, until they weighed over two hundred pounds each.

When Owenhouse first got Shekinah and Sheena, he celebrated by making a Youtube video of him and his children parading the cubs through town on leashes in order to show them off.

That video eventually shows the same tigers, nearly full-grown, walking into Owenhouse’s kitchen and climbing into his bed for a bottle of milk, their standard “reward” for obeying commands (read this blog post for an explanation of why trainers bottlefeed adult big cats as an unnatural form of behavioral conditioning https://projecticarus2015.wordpress.com/2016/02/15/special-snowflake-syndrome-the-truth-behind-special-bonds-and-how-celebrity-conservationists-build-them-on-assembly-lines/). Other Youtube videos show the cubs exploring the well-manicured backyard with collars on, and, when large enough to hurt someone, romping in the snow just a wooden fence away from the neighbors.

Although Owenhouse tells people that his cats live at a “sanctuary” when not performing, they actually live in a 30 by 40-foot concrete and chain-link enclosure attached to an industrial park warehouse in Belgrade, MT, about a mile from a major airport and less than half a mile from another residential area. The location of the warehouse is a closely-guarded secret, but I was able to figure out roughly where it is after an article about an unrelated nearby business mentioned that a warehouse just north of that location is “used by a magician to store tigers.” I’ve attached a screenshot of where I think the tiger pen is.

From an animal care standpoint, Owenhouse is actually pretty good for a private owner. He has no USDA violations (license# 81-C-0031) and I could find no allegations of abuse other than the standard criticism for using tigers as magic props. He feeds his cats Nebraska brand feline diet, which is used by AZA zoos, and he regularly provides them with enrichment toys like Boomer Balls. The 1,200 sq. ft. warehouse enclosure he built for the tigers is partially outdoors and includes a den, a heated pool, and a fountain. Tigers don’t belong in a Montana warehouse, but a privately-owned tiger could do much worse. Here’s a video of the enclosure.

This website has several “behind the scenes” photos of Owenhouse and his tiger enclosures.

In the magic show, the tigers “appear” and “disappear” in tiny cages on-stage. After the illusion, the cage of Shekinah, the white tiger, is opened, the tiger comes out and is rewarded with a bottle of milk, and Owenhouse walks her around the stage with nothing more than a leash and collar for “restraint” (more on this later). Owenhouse brags about his tiger care and reassures his audience that only reward-based training is used. The tigers are transported in a “climate controlled trailer” to 10 performances each month (the animals don’t tour during the summer). Owenhouse brings his tigers to other events on rare occasions. In 2013, he brought one of his tigers on-stage at Montana State University’s freshmen convocation as a tribute to Life of Pi. I’ve also heard reports that when the cats were cubs, Owenhouse brought them to his daughter’s school and allowed the students to pet them.

Although Mr. Owenhouse seems to love his tigers and treats them well, the way he handles them is often extremely reckless. This local news interview shows him engaging in lots of dangerous and irresponsible behavior that’s often seen with complacent pet owners who are convinced that their big cats have “love” or “respect” for them.  http://www.nbcmontana.com/news/ktvm/magician-raises-tigers-perfects-illusions-from-small-montana-town/7815655

Owenhouse claims that the tigers “like to be loved,” and that “we have a wonderful relationship with them, they’re family for us.” He claims that he’s “careful” with his animals, but the news segment includes a clip of his teenage son play-wrestling with the 250-pound tigers. The boy nonchalantly explains that the tigers view him “like a sibling” and that “when it comes to interacting with them, they’re a lot more rough and play as if I’m a tiger.” Lots of people have been injured or killed by tigers that were “just playing.” What’s even more shocking is that he invites the newscaster into the tiger’s enclosure and lets her feed a nearly full-grown, completely unrestrained tiger from a baby bottle.

In a 2014 review of one of Owenhouse’s magic shows, the reporter writes: “He let the tiger out of a cage and only had her on a small leash. I was nervous, until Owenhouse explained that his family raised both tigers and in their backyard.” “Walking” an unrestrained tiger across the stage with nothing but a handheld chain leash is a regular part of Owenhouse’s shows. Not only does this stunt put the safety of the audience at risk, but his “explanation” for it perpetuates the totally false idea that raising a big cat from a cub makes it “safe,” and that it’s OK for tigers to live in backyards.  http://dakotastudent.com/3630/features/owenhouse-escapes-jaws-of-death-during-show/

Like most entertainers who use big cats, Jay Owenhouse portrays himself as a “conservation advocate” and believes that his show helps to “spread awareness” about threats facing wild tigers. But, although a few of Owenhouse’s “facts” about tigers are generally correct, many of them only fuel the myths that drive the exploitation of these animals. He tells people that white tigers are an endangered species that people are breeding for “conservation,” and has stated that “the only threat to wild tigers is poaching” http://rapidcityjournal.com/blackhillstogo/magician-jay-owenhouse-dares-audiences-to-believe/article_c48096fd-fe60-5b21-aff6-9d9383829acd.html (while ignoring habitat destruction, human conflict, and other issues).

In this article, http://ravallirepublic.com/missoula/entertainment/arts-and-theatre/article_2360353a-7177-5414-93d0-e4a4b0fba778.html he claims that tigers “tend to bond to one or two people and also become very loyal if they’re treated with respect and dignity,” perpetuating the dangerous misconception that big cats are made “tame” if hand-raised. And, according to this article, http://www.tri-cityherald.com/entertainment/arts-culture/article32194950.html#! one of the ways Owenhouse “educates” people about tigers is by showing a video montage of him and his family raising tigers in their home at every performance. That sends a completely wrong message that does nothing to teach people about wildlife — one reviewer compared it to little more than a “show and tell” about Owenhouse’s pets.

At every show, more expensive VIP tickets are offered, which entitle the holder to a backstage meet and greet with the illusionist and one of his tigers. Owenhouse claims that the proceeds from these VIP tickets are donated to “help save wild tigers and cheetahs,” and although part of that money allegedly goes to the Corbett Foundation (which is a legitimate conservation charity), the other part of the “donations” go to Doc Antle’s deceptively-named and completely bogus “Rare Species Fund,” which many news outlets mistakenly report as “an animal sanctuary in India.”

According to this article, “because of Owenhouse’s love for animals, he partnered with the Rare Species Fund as Ambassadors to help spread the word.”  http://siouxcityjournal.com/weekender/illusionist-jay-owenhouse-promotes-conservation-of-the-big-cats-with/article_437a2df3-1a64-51fa-942b-6494d2863265.html

Owenhouse’s methods of raising and handling tigers often put himself, his family, and the public at risk, his partnership with Doc Antle doesn’t help true conservation, and his attempts at “education” by showing off his pets often undermine the message he is trying to send.