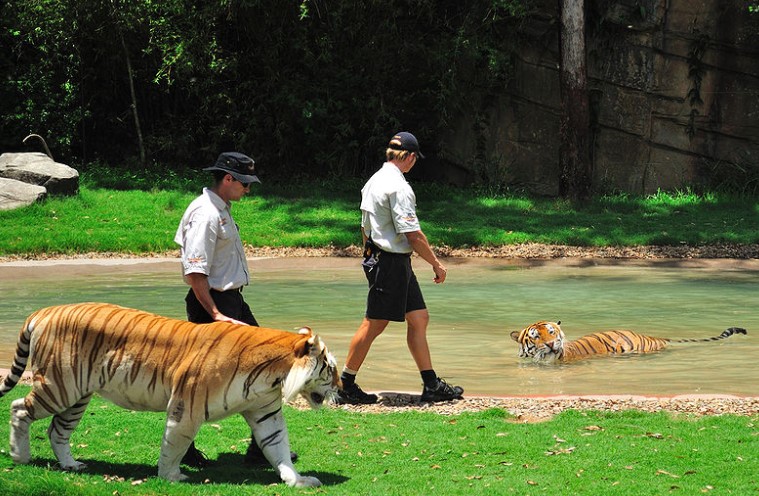 DreamWorld and their “Tiger Island” attraction is a notorious amusement park in Australia. Tiger Island is a self-proclaimed “conservation program” for tigers, but they do a lot of things which no reputable zoo would do. We believe that all of the cubs born there are removed from their mothers and hand-reared, whether it’s medically necessary or not, because DreamWorld believes that hand-raising cubs makes them safe for people to have unprotected contact with as adults.

According to Wikipedia, the few mother-raised tigers the park has “cannot be worked with by Tiger Island staff” and are kept in behind-the-scenes enclosures which the public cannot see. DreamWorld also rents out their tigers for ads and film work, and keepers are constantly in the exhibit with the adult tigers to pet, play with, and “manage” them, which sets a poor example to the public.

There was a recent uproar when a tourist filmed one Tiger Island keeper pulling on a tiger’s tail while another slapped the cat in the face. The park later brushed off the incident by claiming that two tigers “were showing antagonistic behaviour and needed separating” and that hitting them in the face “is the safest way to refocus tigers who are challenging each other and this is consistent with the way in which tigers communicate with each other in similar situations.”

DreamWorld is also known to have acquired some of their tigers from disreputable sources. A tiger named “Pi” was purchased in 2010 as a newborn cub from the Cairns Wildlife Safari Reserve, a struggling private zoo which has since lost accreditation and closed down due to financial issues. In 2016, the Dreamworld purchased two white tiger cubs from Japan’s Hirakawa Zoo to add to their breeding program, even though white tigers have a negative conservation value and are not a species of tiger. The Hirakawa Zoo breeds, sells and trades white tigers with zoos all over the world and was sharply condemned by NGOs for earlier failed plans to send some of its white tigers to a struggling Cambodian “nightmare zoo,” even after the owner admitted that he lacked the funds to care for them and that his existing animals were living in deplorable conditions.

After being criticized for exhibiting white tigers, DreamWorld “did not respond to questions from ABC on inbreeding, genetic defects or how their two new white tiger cubs were bred.” Instead the park’s spokesman boasted about the profit that the cubs would bring in, stating that they would “[help] to secure the future of this facility and continue our significant financial contributions to tiger conservation.”

There is no reason to be breeding tigers for life in cages.

As long as people will pay to see tigers in cages, that money will not be going into real conservation projects that would save them in the wild.