More in Browse by Name: 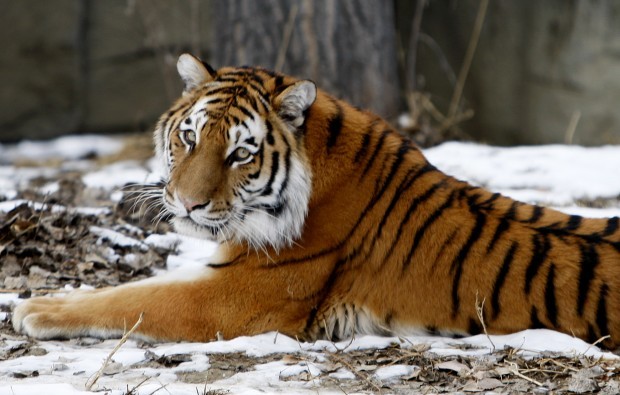 Koosaka, a Siberian tiger, looks at visitors from his ZooMontana enclosure in 2011.

Two of ZooMontana’s Siberian tigers have moved to a new home.

Tierny and Koosaka, a pair of 5-year-old sisters on loan from the Philadelphia Zoo, left Billings on Monday morning for the Binghamton Zoo in New York, said ZooMontana Executive Director Jeff Ewelt.

The Billings zoo continues to be home to Prince, also a Siberian tiger.

The Binghamton Zoo had been without a tiger since losing its sole tiger to suspected kidney disease last August, according to an article from the Associated Press. Tierny and Koosaka will go on display there starting Wednesday.

The transfer of the two big cats was expected. The decision by the Philadelphia Zoo to move them came in the aftermath of ZooMontana losing its accreditation in May 2011.

The Association of Zoos and Aquariums revoked the zoo’s accreditation because a long-term funding plan was not sufficiently in place. That prompted the Philadelphia Zoo to relocate the two tigers, although an inspection of the tigers last August by that zoo’s animal curator showed the tigers were in great shape.

The choice of where the two tigers would go was decided by a recommendation from the Species Survival Plan. The tigers came to ZooMontana through that breeding program.

ZooMontana coordinated with the Philadelphia and Binghamton zoos on the transfer of the two tigers, Ewelt said Saturday. As hard as it was to see them go, he said, the move has its upside.

“It was tough personally, but on a business level it’s not a bad thing by any means,” Ewelt said. “With winter coming, that’s two less mouths to feed.”

Come spring, he said, the zoo will begin to look for opportunities to bring in additional big cats. As for the zoo itself, Ewelt sees it moving in a positive direction.

“We’ve had a really good summer,” he said. “We feel really good that respect and credibility are coming back.”

ZooMontana hosted events nearly every weekend this summer, including a revival of ZooGrass, and slots for weddings and company picnics have been selling out. The zoo has also seen a lot of repeat visitors.

It will go into winter debt-free, “something we haven’t been in a while,” said Ewelt, who came on board to steer ZooMontana in a new direction after it lost its accreditation.

The first opportunity the zoo has to reapply for accreditation is in September.

“We are at the point where we’d be accredited quite quickly,” he said. “But we’re going to wait.”

The zoo has challenges ahead, but is ready to meet them, Ewelt said. He and other zoo officials are looking at different avenues to become financially stable, and Ewelt is optimistic the zoo will reach that point.

“Becoming sustainable is certainly on the horizon for us,” he said. “It’s going to take some work, some creative thinking to make that happen, but we’ve got a great team and people on our side.”