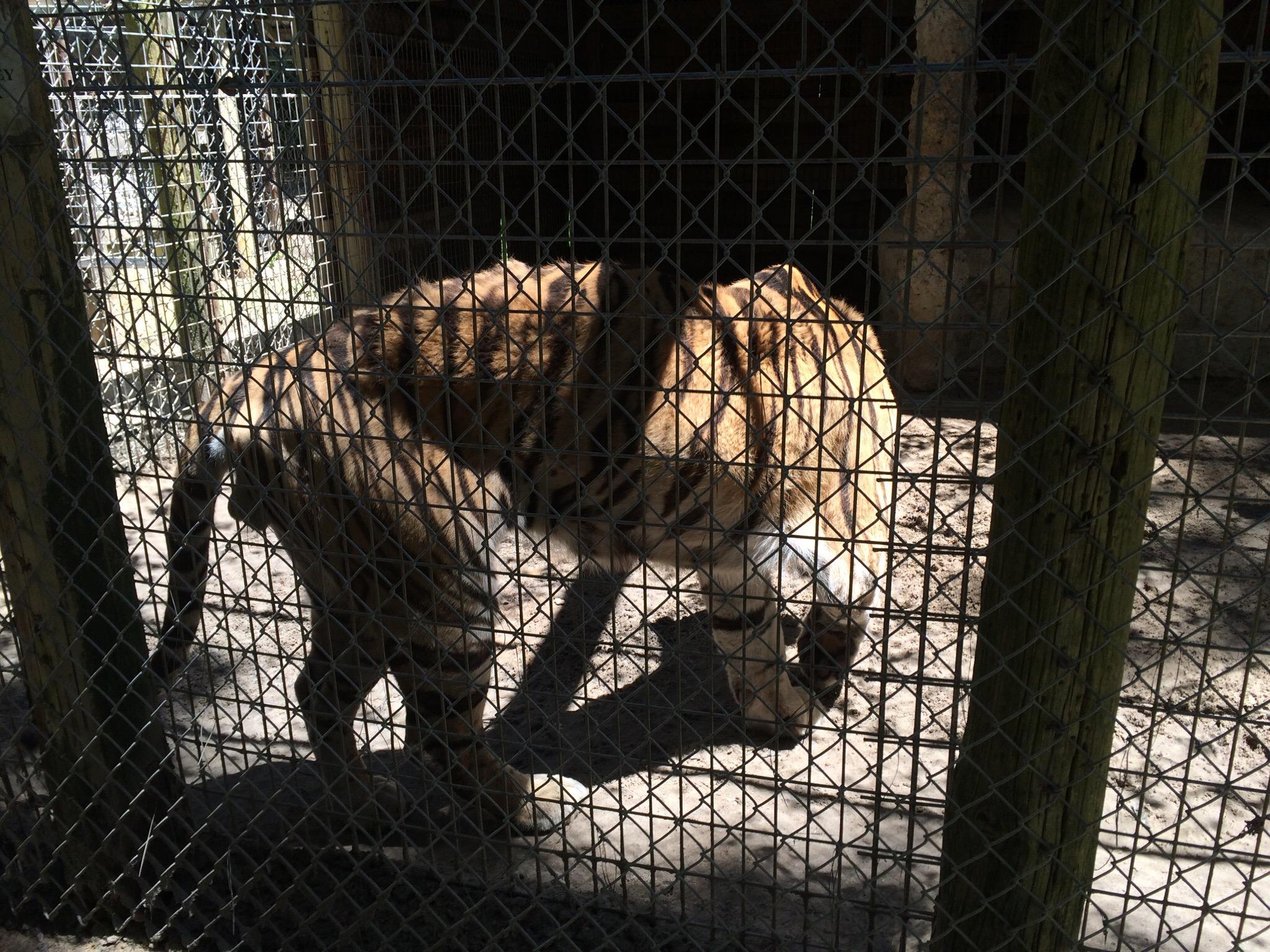 February 2020 — someone who cares about the horrible condition of the big cats and other animals, including 2 bears, at Waccatee Zoo visited this hellhole on February 10th and took these photos of this almost hairless and obviously suffering old tiger at the zoo.

January 2020: We conducted some online research of Waccatee Zoo in Myrtle Beach, South Carolina and it’s one of the worst places we’ve ever researched, and that’s saying something.  The majority of Waccatee’s online reviews include photos of severely emaciated, injured, mangy, sick, and dying animals crammed in small muddy cages, along with incredulity that the whole place hasn’t been shut down yet. If these were domestic pets they would be confiscated, and the owners charged, for much, much less. These conditions wouldn’t be out of place in a third-world country tiger farm, yet here they are, in 2020, near a major US resort town. All of these photos have been taken at Waccatee Zoo in the last few years:

Waccaatee’s owners/staff are reportedly very flippant about the condition of the animals and act as though they’re entitled to have them. Multiple reviewers claim that the owner rudely insisted that obviously dead animals were “sleeping”, one keeper was observed smoking in the animal pens, and at least one animal died of a known illness which deliberately went untreated on the grounds that he was “too old to save.” Video recording is banned on the premises (usually a sure sign of animal abuse) and the owners have repeatedly refused offers of help. They clearly appear to have no intention of improving conditions for the animals, having ignored USDA orders to do so since 2018.

Even though Waccatee has been in blatant violation of local, state and federal animal cruelty laws for decades, they remain open with no legal penalty because the USDA just keeps citing them repeatedly with no consequences, no matter how many times people complain. Every branch of South Carolina law enforcement that’s been contacted so far refuses to investigate, claiming that it’s outside their jurisdiction. Maybe this is why South Carolina seems to be a haven for abusive roadside attractions.

This appers to be the current legal situation:

The creators of the “Close Waccatee Zoo” Facebook page recently contacted the South Carolina Department of Agriculture and received this response:

“I appreciate your contact to express concern about Waccatee Zoo in Myrtle Beach. Unfortunately, SCDA does not have regulatory authority over this type of operation to investigate these claims. You are probably aware that the State of South Carolina gives responsibility to regulate animal welfare or potential abuse investigations to the local authorities at the county level… …This means that the local animal control or sheriff’s department will investigate these reports, depending on who is designated in your county. If you have concerns about how local authorities are handling animal care and control, you could try notifying the South Carolina State Law Enforcement Division (SLED).”

SLED was then contacted and passed the buck to the feds:

The provisions of the Animal Welfare Act are enforce by the U.S. Department of Agriculture (USDA), which enact regulations to implement these provisions. The USDA’s Animal and Plant Health Inspection Service (APHIS) conducts annual inspections of all licensed facilities and generally oversees compliance.

PETA has reached out to the local law enforcement in Horry County, where Waccatee is located, urging them to investigate, only to be told that:

“the Waccatee Zoo is under the purview of the USDA and outside of its jurisdiction.”

Despite what Horry County claims, South Carolina’s Cruelty Statutes absolutely give county sheriffs and local police the authority, and responsibility, to obtain search warrants and seize any animal from any owner when there is “reasonable cause to believe that the laws in relation to cruelty to animals have been or are being violated in any particular building or place.” Other county sheriffs have used this authority to rescue domestic animals from cruel conditions — the Greenville County Sheriff’s Office recently seized 40 dogs from a puppy mill, for example. There is NOTHING in the state regulations which somehow exempt USDA-licensed zoos from state and local cruelty laws. In fact, state law allows the South Carolina SPCA to place confiscated animals at other facilities, and I know that they would be happy to help shut Waccatee down (they’ve been trying to for years now.) So as far as I can tell, there’s no legitimate reason for Horry County law enforcement to refuse responsibility for this situation.

PETA believes that a new potential legal avenue to at rescue at least some of the animals would be to argue that Waccatee is not in compliance with a new South Carolina state law banning the private ownership of big cats, bears, and great apes. This law was, ironically, pushed for by Bhagavan Antle to prevent more regulation of his business, but there are some loopholes in it which could potentially allow the state to seize big cats from private zoos. In a nutshell, the law bans the possession of big cats, non-native bears, and great apes. It exempts valid USDA license holders and existing owners, but ONLY if said licensee is “in compliance with the United States Department of Agriculture Animal Welfare Act regulations and standards as of January 1, 2018.”

We know that Waccatee has has repeat NCIs on their record for years now, so they aren’t in compliance with this law, which means that animal control authorities should have the legal right to confiscate the big cats and bears under “probable cause” that Waccatee is keeping them in contravention of the law. Animal control also has the power to confiscate exotic animals “in imminent danger of loss of life as a result of the action or inaction of the possessor as determined by a veterinarian.” The new law also stipulates fines and jail time for violators and provides a mechanism for confiscated big cats to be sent to out-of-state facilities, potentially permanently, depending on a judge’s ruling.

Posted on November 15, 2018December 3, 2018 975 0
Despite flagrant violations of the Animal Welfare Act, USDA rarely cites facilities, so when a facility is cited in almost every inspection report, it...
Read More