Two months ago Andrew and Christine Smith started seeing a bobcat going back and forth through their Starlight Drive back yard in Murphy. They typically saw it around sunset. The Smith’s own a small dog which they never let into their backyard without supervision because their backyard is fenced on only three sides and they didn’t want Pugsly to run away.

The day Mrs. Smith saw the bobcat in their backyard she was watering her tomato plants, Puglsy was outside with her. She saw the bobcat in the corner of the yard and he appeared to be stalking her dog. She called for her dog to come to her, he wouldn’t come to her because he thought he was in trouble. She had to walk to him, consequently walking towards the bobcat. Mrs. Smith said she felt panic and “irrational fear for herself” while doing this. She had heard there had been bobcat  sightings in her neighborhood and when she saw the bobcat this close it made her nervous.

Mrs. Smith called 911 and was eventually transferred to the Murphy Police Department. A police officer came to their house and told them if the bobcat was trapped, it would be taken to East Texas and released. Animal Control Officer (ACO) Tammy Drake came out with a  tranquilizer dart gun. Unsuccessful with the dart gun she left a trap in the Smith’s backyard about two or three weeks ago.

Over the previous two to three weeks multiple animals have been trapped in that trap – an armadillo, possum and raccoon. Officer Drake came to their house, asked if they would like the animals removed from their property or just let out. Each time The Smith’s said to let them out.

Mr. and Mrs. Smith frequently checked the trap because with the hot summer we have been having they did not want an animal trapped without shade or water. Wednesday, August 17th at approximately 9:30am the Smith’s were surprised to see the bobcat in the trap. They had used a whole fish as bait on Tuesday night. They called animal control, but there was no answer (because Officer Drake was on vacation) so they called the non-emergency police number. Surprise that the bobcat was caught was expressed by the police.

Within forty-five minutes the stand-in Animal Control Officer (ACO) arrived at the Smith’s house. The ACO told the Smith’s on arrival that Murphy cannot relocate the bobcat since the city was not licensed to relocate through the Parks and Wildlife Dept. The ACO said that she would try to sedate and euthanize the bobcat and if that didn’t work they might have to shoot it.

Mrs. Smith said they had “never, ever been told that euthanasia was an option.” If they had been told that, they would not have agreed to the trap.  They pictured trapping the bobcat and it being transferred to a nice place in East Texas.

The stand-in ACO was trying to sedate the bobcat when a Murphy police officer arrived. Mrs. Smith went outside to direct him to the bobcat and ACO. Then Mrs. Smith went back inside with her husband and continued to watch from a window.

The ACO was on the left side of the trap with a syringe trying to sedate the bobcat. The police officer was on the other side kicking the cage, yelling and stomping the ground. At that time the bobcat became aggressive – inside the cage.

The Smith’s watched the officer pull his gun in and out of his holster repeatedly. The Smith’s speculate that the ACO couldn’t sedate the bobcat.  The officer pulls his gun out, puts it near the cage and pulls the trigger. He killed the bobcat with one shot.

Mr. Smith believes the shot went through his head because he saw no other holes in the body and blood was coming from the bobcat’s nose.

The ACO and officer carried the trap through the yard, (the blood stain is still visible), and over the driveway leaving a blood trail that Mr. Smith cleaned up himself. The trap containing the body of the bobcat was loaded into the truck and the officers left, never coming back to talk to the Smiths about what just happened.

The Smith’s feel that if Officer Drake had been on duty the day the bobcat was trapped that this entire event would have had a different ending. They believe that the bobcat would have been brought to East Texas and released to live another day.

If they had this day to do over Mrs. Smith says she would call In-Sync Exotics (972-442-6888) to come and pick up the bobcat. Mr. Smith says he would have loaded the trap into the back of his truck and brought it to a safe place and released it himself. They both said that the trap was a humane trap and they felt like they could have easily picked it up without any danger to themselves.

Mrs. Smith expressed having feelings of guilt, sadness and anger after the bobcat was shot in her backyard. She now has hope that the City of Murphy will change their policies and that this will never happen again.

Murphy Police Department, Chief GM Cox takes full responsibility for what happened. He reports that the stand-in ACO is an experienced and certified ACO. He says, “We make no excuses – we could have done a better job, period.” He says that he does not believe the ACO “acted out of any malice or ill intent. She explained to me her decision-making process. She felt that it was the correct thing to do.” He also says, “clearly there were other things we could have done that did not get considered.”

Chief Cox continued to say, “As of right now there is not a policy that dictates to the ACO what to do in this type of situation. Rather we have relied on the ACO’s experience and the circumstances to dictate the actions to take. We will be evaluating whether this needs to change.” He also says that, “We should have contacted a local group or another wildlife coalition to assist us with the relocation prior to taking the action we did.”

When Officer Drake returns from her vacation there will be a meeting to discuss present policy and protocol. Chief Cox says that, “I can tell you now that our policy, written or not, will not include shooting a caged animal unless there is imminent risk to humans or other animals. We will try everything before we decide to euthanize, by any means, an animal such as a bobcat. Gets a bit murky when dealing with rabid animals, skunks and the like though.”

There is  a plan for a police department tour of In-Sync Exotics Wildlife Rescue & Educational Center in Wylie.

Also planned is a citizen information program regarding wildlife that will be held September 8th at City Hall, 7 p.m.,  pending approval from the City.

Photo provided by the Smith family

The Bobcat and the Cop 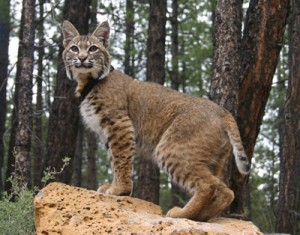 The Bobcat And The Cop My Last Day Alive

This story was brought to us by a man who is working to protect bobcats in Texas.  He says, ” I filed a formal complaint with the Texas Commission on Law Enforcement Officers and Education.  This is the agency that issues licenses to cops for their weapons.  I have said that this officer is not in full grasp of his mental faculties if he is going to shoot and kill a caged bobcat.  He doesn’t deserve to carry a gun.  Myself and a member of PETA are putting on a program called Wildlife Awareness Petition drive.  We are circulating a statewide petition in San Antonio, Austin and two other cities, to have the public force the city of Murphy to fire the man.

This complaint has been filed online with the Governor of Texas by the man who contacted us in September 2011 about the killing of the bobcat.
“I wish to file an official complaint against Mr. David Sinclair, the Director of Texas Parks and Wildlife Dept. Mr. Sinclair has failed to prosecute a Murphy, Texas Police Officer for Violating Parks and Wildlife  Statute Chapter 67, Section 67.002. This Section states that; § 67.002. MANAGEMENT OF NONGAME SPECIES.  (a) The department shall develop and administer management programs to insure the continued ability of nongame species of fish and wildlife to perpetuate themselves successfully.
The Murphy Police Officer shot and killed a bobcat while it was trapped in a cage.  The police officer thereby prohibited the bobcat from “perpetuate itself successfully.”
This crime is, according to the Parks and Wildlife statute Section 67.005 is a Parks and Wildlife Class C Misdemeanor.
Name and phone number were provided, but withheld here for privacy reasons.

This was our letter to the citizen wishing to help the bobcats:

Dear Name Withheld,
Thank you for caring enough to do something about this.

Petitions are the easiest way to gather names, but have the least amount of impact because decision makers know that people will often sign a petition without thinking about it.

We would be happy to send out an alert to our TX supporters asking them to send letters to TX lawmakers.  Killing a bobcat falls under the authority of the Texas Parks and Wildlife http://www.tpwd.state.tx.us/business/licenses/public/recreational/index.phtml

I don’t know the particulars of TX law, but in FL you have to either have a license to kill a bobcat in season with some kind of bag limit, or the animal has to be deemed a nuisance, which is probably what your police officer did.

To keep this from happening again, it doesn’t do a whole lot of good to just demand this person’t job.  It would make more sense to send thousands of letters to the TX Parks and Wildlife office asking them to remove bobcats from the list of species that can be hunted or killed as nuisances.  If you check out CatLaws.com site, and send a letter there, you will see how the system works.  We could target both the TX Parks and Wildlife and the police chief where this happened to get the most mileage out of the request.

What I would need are the names, addresses and most importantly the email addresses of the people who should be the target of the email campaign and photos or video, if any of what happened, news stories, etc.