After Tiger Temple announced 2 days ago that they have obtained another zoo licence, it was gut wrenching, however not surprising.

As you know, Cee4life investigated the Tiger Temple for many years and collected further evidence proving the wildlife trafficking, yet again at tiger temple. This evidence consisted of CCTV, video interviews, audio recordings and other documentation. The evidence is without a doubt, however, once again the Tiger Temple has gotten away with its crimes.

From previous experience, we knew that the Tiger Temple was probably going to wiggle its way out of this, so we continued to investigate evidence that we had prior to the release of the report.

We now have evidence and proof of illegal sales and international transport relating to the tigers of tiger temple. 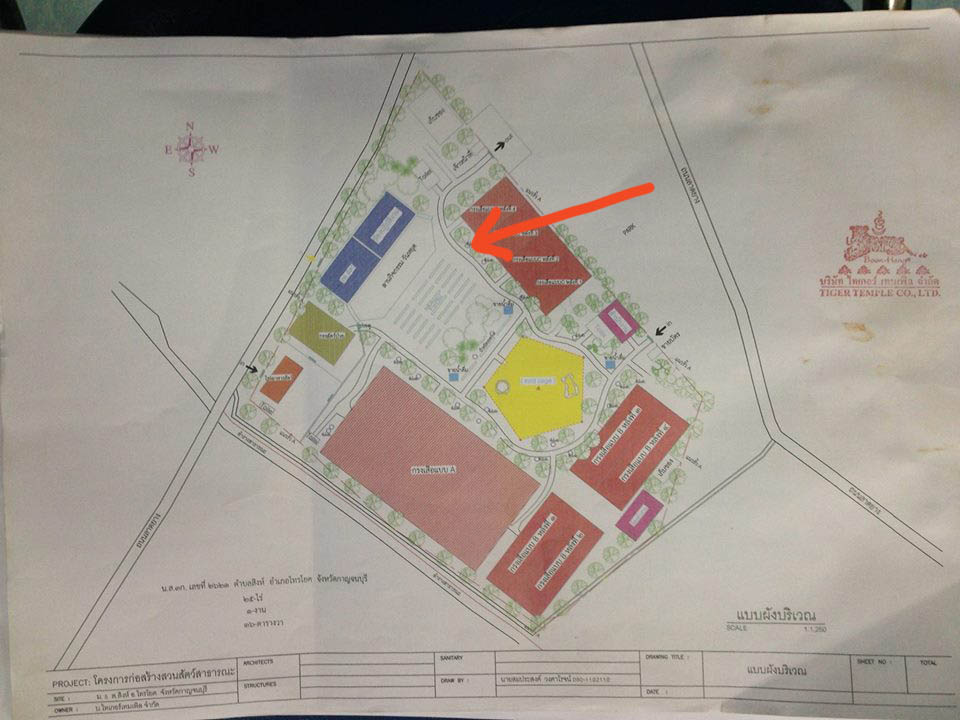 The official plan for the zoo on 4 hectares of land, with in the centre a show area for people to watch tricks with the tigers.

The above plan for the tigers is not viable. 4 hectares for 150 tigers is highly unethical. Performing tricks? I can only imagine that they are also trying to pass the 10+ tigers slammed into a cage together and continue with the rotation of the tigers into the grassed areas, the same as they do now.

The reason I would like you to view and understand this report is so you are armed with the details and understanding of what the evidences actually are, so when further action occurs to stop this wildlife trafficking operation, you have full knowledge of the evidences and can support this action. The action will probably be legal.

The Tiger Temple Report is based on motive, means, intent, and opportunity, meaning

1. the ability to commit the crime,

2. the reason the crime was committed, and

3. the chance to commit the crime.

Links to the core elements evidence are as follows:

Please note that these video’s are shortened versions. The long versions go for about 3 hours.

Interview with long term Senior Tiger Temple staff member, Kasaem Pholchai, who has worked at the Tiger Temple since early 2000s. He is interviewed in Dec 2014 by senior temple legal advisor and admits to being ordered by “Luang Phor” (‘meaning venerable father’ –The Abbot Wisuthisarathera of Tiger Temple, to open the gates on the 20th and 25th/26th of December 2014 to participate and allow the tiger trades of the tigers

Conversations with the Tiger Temple staff on the mornings after the 3 tigers went missing. They confirm that they all know, confirm that they were ordered to stay quiet, and confirmed the tigers were taken because they were to be swapped for one white tiger. Additionally, we have since obtained an eye witness that confirmed that 10 tigers were originally supposed to be swapped for the white tiger. Evidence 5 – pages 21 – 23 of the Tiger Temple Report

There are another 11 evidences to show that this wildlife trafficking has been going since conception of the idea of Tiger Temple within the Tiger Temple Report.

This new evidence that I will be presenting next week (2016) is of the selling, gifting of tiger temple tiger body parts and transporting of tiger body parts across international borders, and this has also been going on for years. The evidence includes photographic evidence, witness statements, and the stopping of these body parts entering Australia at the border control checkpoint, that occurred a couple of weeks ago. These are breaches against Thai law, CITES, and every country where these body parts have been transported and brought into.

The Tiger Temple is the epitome of long term criminal behaviour. It has been admitted by its staff and hierarchy, and it will continue.

To let you know how serious this is, just one of the concerning factors that occurred not long after the Tiger Temple Report was released, was that there was an attempted cover up/ mock up of fake documents to make the disappearance of the 3 tigers in Dec 2014 seem legal. This was addressed, and nothing more was heard about it, up until now. Tiger Temple has stated the disappearance of the 3 tigers was legal. There was nothing legal about it.

So as you can see, this is an extremely sordid and dark case, that is ongoing.

It requires a very big effort in order to protect these tigers as there is zero faith that Tiger Temple will stop what they have been doing for years. This effort must probably come in the form of legal action against this current decision to allow them to keep the tigers under a zoo licence. If this licence is granted, there is no doubt that tigers will continue to vanish along with other endangered and protected species.

Thailand is one of the biggest wildlife trafficking hubs and Tiger Temple is only just one situation of this illegal trade going on. As this case is already very well known, we have a good chance to address this further legally. It will take guts to do it, but it would be a magnificent feat to truly protect these tigers forever and send a message that this practice will not be tolerated by the conservation and animal organisations within Thailand and from around the world.

I look forward to your thoughts.

Enjoying the trip of a lifetime to Thailand, university student Isabelle Brennan strokes a young tiger at a popular tourist attraction – one of the few places in the world where you can pet the deadly animals while they sleep.

But just minutes after this photo was taken, another 400lb tiger leapt into the frame, knocking the 19-year-old to the ground with its paw and sinking its teeth into her thigh.

She was saved when keepers at the Tiger Temple sanctuary in West Thailand jumped between her and the animal, while her sister and travelling companion Georgie, 21, dragged her to safety.

Calm before the storm: Isabelle Brennan, pictured stroking a tiger – she would later be attacked by one of the big cats

In hospital: Following the attack, Ms Brennan was told she would have scarring for life

Eight weeks on, Miss Brennan is recovering at home in Harrogate, North Yorkshire, but cannot walk unaided, while doctors said the four-inch wound will leave her scarred for life.

The University College London student wants to warn others of the dangers of approaching the orphaned tigers, which are hand-reared by Buddhist monks at the controversial sanctuary.

Reliving the nightmare she said last night: ‘I feel lucky to be alive. Everything happened so fast. One minute I was petting a tiger’s back, the next it turned its head and knocked me to the ground with its paw.

‘As it lunged with its teeth I felt an agonising pain on the inside of my left thigh above my knee. What happened next is a blur.  But a keeper jumped in between myself and the tiger. Then, while the keepers pulled the tiger to stop it attacking me further, my older sister Georgie dragged me under my arms to safety.’

Wound: Ms Brennan was bitten by a 400lb tiger

The stunned teenager added: ’When I looked down at my leg it was terrifying. All I could see was blood.’

Two friends in their group immediately tied a tourniquet round Miss Brennan’s leg to stop it bleeding.

Meanwhile, the Human Sciences student who is studying for a degree at University College London was rushed to Thailand’s Kanchanaburi Memorial Hospital where she needed ‘tens of stitches’ to repair the four-inch wound.

She then had to remain in hospital for a fortnight after contracting an infection and high fever.
Her sister, 21, was forced to make the call to parents Margaret and Nick Brennan, 56, an architect.

Mother Margaret Brennan, 52 a former nurse who now runs her own business, said: ‘When Georgie rang the first thing she said was ‘firstly Isabelle’s ok’ but I was very upset. I couldn’t believe it when she said Isabelle had been bitten by a tiger.’

But finally after a gruelling two weeks in hospital – when she was pumped with strong antiobotics – she was well enough to fly back to the UK.

However, Miss Brennan was to spend a month in a wheelchair and on crutches. She is now learning how to walk again.

Eight weeks since the attack, she is still limping and doctors have told her she will have a permanent scar.

Miss Brennan and her sister from Harrogate were in the first week of their trip of a lifetime in Thailand, which they had spent six months saving for, when they visited Tiger Temple.

‘I was nervous about going into the Temple,’ says Miss Brennan, ‘however, I was reassured by the staff that as the tigers had been hand reared, they were so used to humans they were completely tame.

Reminder of horror: The wound after being stitched

‘They were also tethered by chains and the staff told me no-one had ever been seriously injured.’
After petting some tigers in an enclosure, Miss Brennan – who followed all the Temple rules such as not wearing bright clothes to excite the tigers – decided to go into a special area where she could wash the tigers.

‘We were given a talk beforehand and told not to touch the tiger’s head and to remove dangly jewellery. We were then shown how to wash a tiger’s back.’

It was while Miss Brennan was washing one tiger’s back, it turned round and mauled her.

She says: ‘In hindsight I had an incredibly lucky escape. I could have lost my leg or worse. The Tiger Temple staff were very upset. They paid for all my treatment in hospital and visited every day. They explained the tiger was just being playful. However, I want to warn others going to Tiger Temple that the animals might not be as docile as they first appear.’

June 20, 2008 Thailand’s Tiger Temple: In a report on the Tiger Temple released today is documented and account of a Thai woman who came with her partner to help raise funds for the Temple, put her hand into the tiger, Dao Ruang’s, cage to pet her. Dao took hold of the woman’s hand with her mouth. When the frightened woman tried to pull her hand away, Dao Ruang bit through it and held on. The woman’s partner came over and hit Dao Ruang over the head. The woman’s hand was badly torn between her 3rd and 4th fingers and required numerous stitches to close the wound.

On other occasions, investigators observed tigers attacking staff and volunteers. One resulted in an injured finger, which needing suturing, another a French volunteer whose shirt was ripped, narrowly missing her neck and another a Danish volunteer who was tackled to the ground by and bitten on the leg. The resulting injury got infected and the volunteer need medical treatment at a hospital. During an interview with a journalist in January 2008, the Abbot was asked why the tigers do not bite. The Abbot said, “They want to bite and one day they will bite.” Meanwhile the Monks spray tiger urine in the cats’ faces to subdue them.

See a slide show of people being stupid with tigers and contributing to the abuse of tigers at the Tiger Temple by paying to have their photos made with the big cats HERE.