From Howard Baskin 3-24-12:  Yesterday I went to the Sarasota County Fair where Joe Schreibvogel has 3 tiger cubs. Nearby the equally despicable Frisco Family has their little circus act.  Schreibvogel has two cubs there that are probably about six months old.  They spend all day in small barren cages, perhaps 8 or so  feet square.  You can see one in the photo below.  Behind the cub you can see another small cage that houses a tiny cub that Schreibvogel’s people say is 10 weeks old.  This poor little guy is the money maker.  Person after person after person was charged $30 to spend about 8 minutes handling this poor cub virtually nonstop for hours.  I heard Schreibvogel’s manager telling people there was an hour wait. 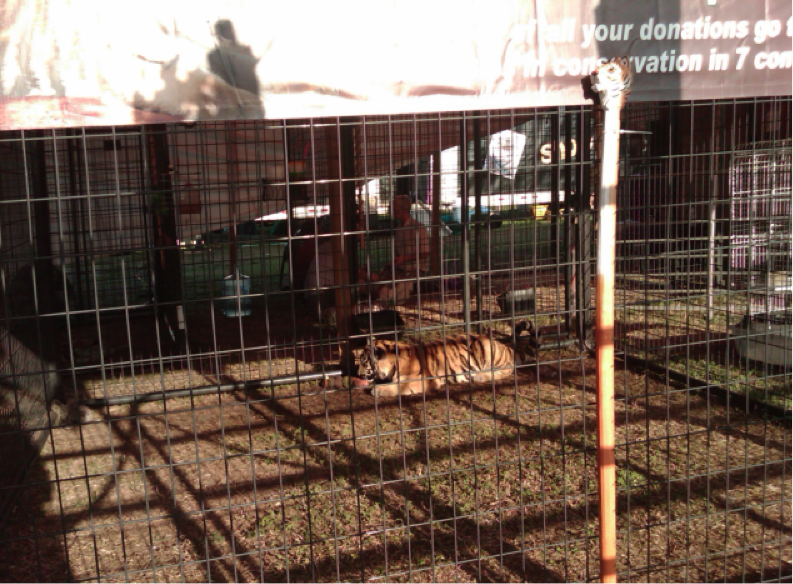 The Friscos make their money from tigers by putting on a 20 minute pathetic little circus act with 4-6 tigers a few times a day in the small ring pictured below. 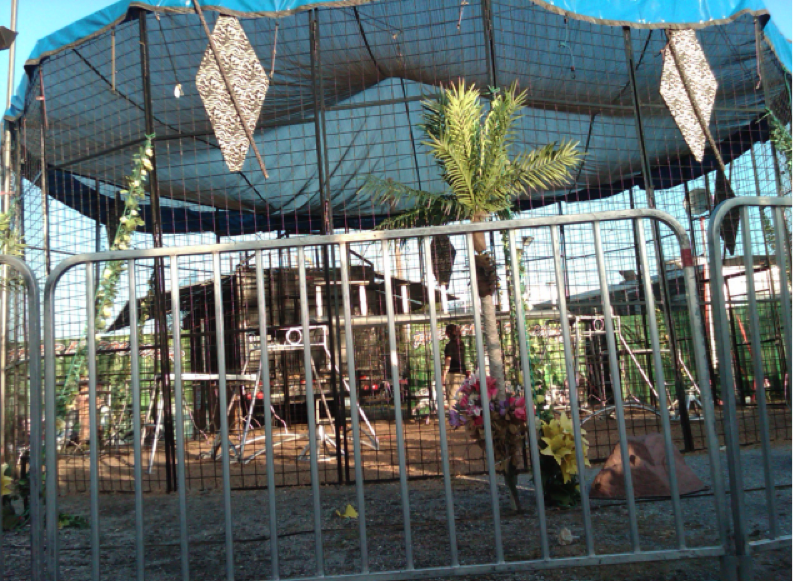 The cats do about a half dozen “tricks” like hopping up on stools and rolling over on the ground.  One hops on its back legs, not something any tiger would ever do naturally in the wild and not something that is likely to be good for its legs and back.  And where do these grown tigers stay when not in the ring?  They live in tiny boxes pictured below where they can do little more than stand up and turn around. 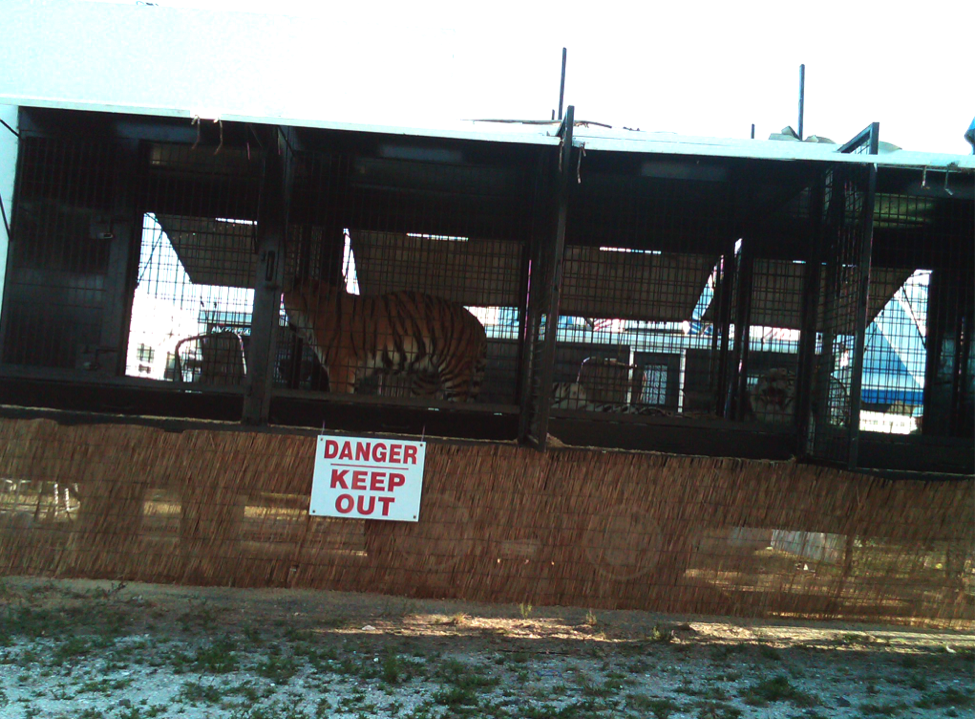 Schriebvogel has now given me the dubious honor of featuring a photo of me with law enforcement officers on his Facebook page, claiming that “Criminal charges are being filed on Howard Baskin of Big Cat Rescue for Assaulting a Tiger trainer at a fair in Florida,” which apparently is Terry Frisco’s claim.  The truth is that as I was trying to leave the fair, Frisco ran in front of me, blocked me with his body and arms outstretched, and when I tried to step around him he bumped me, claimed I had bumped him, and then suddenly shoved me violently to the ground without provocation.  The law enforcement officials had us each write out our statements, which is what is happening in the photo Schreibvogel posted.  No charges have been filed.

But, the police report and Schreibvogel’s post are not their biggest lie.  The biggest lie is the sign that claims that watching tigers used to make money this way somehow preserves the endangered species. 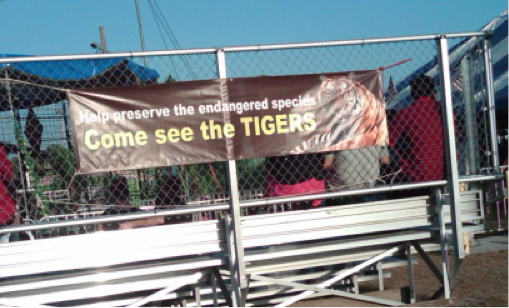 Today protesters held up signs on the main street by the fair to express their objection to this exploitation.  Many thanks to them for taking the time and effort to be a voice for the animals!

Meantime, these poor animals will suffer for one more day here, then be boxed up and carted across the country in tiny cages so Schreibvogel and Frisco can selfishly use them to make money at the next stop.

The insensitive management of the Saratoga County Fair was unwilling to stop this inhumane treatment of animals despite receiving over 1200 emails from people who care about animals.  But, in the last year or so at least 21 venues have agreed not to allow Schreibvogel’s exploitive cub petting exhibit once they learned the truth about what happens to these poor cubs and learned there were so many people like you who do not want to see animals used this way.  The trend is in our favor and your persistence in letting them know how you feel is paying off.

Thanks very much for helping us stop abuse of big cats!

A reportedly “startled” elephant kicked a circus trainer or groom so hard that he was thrown 20 feet and died of his injuries at the scene. The attack occurred backstage at a Shrine Circus performance Friday evening in Wilkes-Barre, Pennsylvania.

The elephant involved is believed to be an African elephant named Dumbo, who was captured in Africa in 1985 and belongs to Terry Frisco. PETA has previously caught Terry’s brother, Tim Frisco, beating elephants behind-the-scenes.

No word yet on whether circus mouthpieces are attempting to claim that the elephant was “playing” with the trainer, but if a “startled” elephant can be this dangerous, imagine the damage that a really angry elephant can inflict. It makes the video that we told you about last week—in which a trainer with the Liebel Family Circus holds a toddler in one hand as she uses a bullhook in the other to jabs an elephant with a bullhook in the other—all the more harrowing.

This isn’t the first time that an elephant has lethally lashed out at the guy wielding the bullhook, and it almost certainly won’t be the last. Circuses rely on an abusive training regimen that starts with beatings and intimidation from the time that elephants are still babies and doesn’t stop until they’ve performed their last headstand. Is it any wonder that some of these gentle giants eventually get fed up and fight back?

PETA has been trying to convince the Shriners to stop using animal circuses as fundraisers for years to no avail, despite the fact that their circuses are connected to a growing list of dangerous and deadly incidents involvingwith wild animals connected to its circuses. Last year, two elephants performing at the Murat Shrine Circus in Indianapolis, Indiana, knocked down a mobile staircase during elephant rides, resulting in a dozen children being treated by paramedics.

In 2005, a trainer was stomped to death by an elephant used in a Shrine Circus in Fort Wayne, Indiana. In 2002 and again in 2003, elephants bolted from the Shrine Circus tents and went on rampages in Wisconsin and Michigan, respectively. It’s sad to think that this tragic list of deaths and injuries has failed t o make them Shriners come to their senses.

Other reports about Joe Frisco and his son, Terry Frisco and Felicia Frisco

There is a paparazzi style media group called Splash that seem to make a career out of promoting cruel acts involving animals.

They promoted Jim Jablon spending a month in a cage with two lion cubs.  The unemployed Jablon claimed to have made more than $70,000 off that publicity stunt, but did not say how much he had to pay Splash.

The very next month Splash was promoting Kevin Antle, who calls himself Doc Antle, on Good Morning America who vouched for the circus family of Frisco’s who call their act Tiger Encounter.  GMA had learned that Antle had sold the tiger to them, but he claimed that the cub was born at the Frisco’s compound and that the cats were not related to his.  No government agency currently keeps very good track of where they are born, sold or end up when they die which could explain why the U.S. is the second largest consumer of illegal tiger parts.

Some accounts state that Terry, Linda and Felicia Frisco are based out of Peoria and others say they are camped out in Tampa, Florida.  They travel with tigers and elephants that are made to perform un natural acts before crowds of ill informed, or ill mannered people who either don’t know or don’t care about the suffering inherent in being forced to travel long hours, relegated to circus wagons, only to be put through their paces at the end of a whip or bull hook.

While the family claims to only train using positive reinforcement, that is what all the circus folk say, and it is not the only training required to make animals do things that are painful and fearful for them to do.

Since the people who profit from these kinds of stories are those who force animals to entertain, or who breed them for the purpose of pulling them from their mothers to be used as photo props or pay to play sessions, the only way to stop the abuse is to refuse to hand over your money.  There are no good places that allow contact or that pose with wild animals, thus driving the market for pay to play sessions.  If you see someone posing with a tiger or a lion; even a cub, then you know that they are not kind to animals and haven’t thought twice about the misery they are inflicting through their actions.