Branson’s Promised Land Zoo opened in 2013 as a sister park to Promised Land Zoo in Eagle Rock, MO. Both parks are for-profit businesses that are owned and operated by Jeff and Diane Sanders and their daughter, Laura Remenar, and her husband, Joshua Remenar. The facility boasts about allowing the public to handle baby dangerous animals, such as tigers, in what’s known as Pay To Play or cub handling. They are also buying and selling exotic animals as pets, for entertainment purposes, and for slaughter. They are the self-proclaimed “largest producer of African Caracals in the US.” Their various USDA licenses have accumulated violations for having no record of attending veterinarian visits, no veterinary care plan, no program of environment enhancement for non-human primates, animals with excessively long hooves, expired vaccines, failure to have a knowledgeable adequately trained employee responsible for big cats on public display, rodent feces present in feed storage building, failing to provide an adequate barrier between animals and the public, allowing their license to lapse, and failure to provide an adequate perimeter fence. 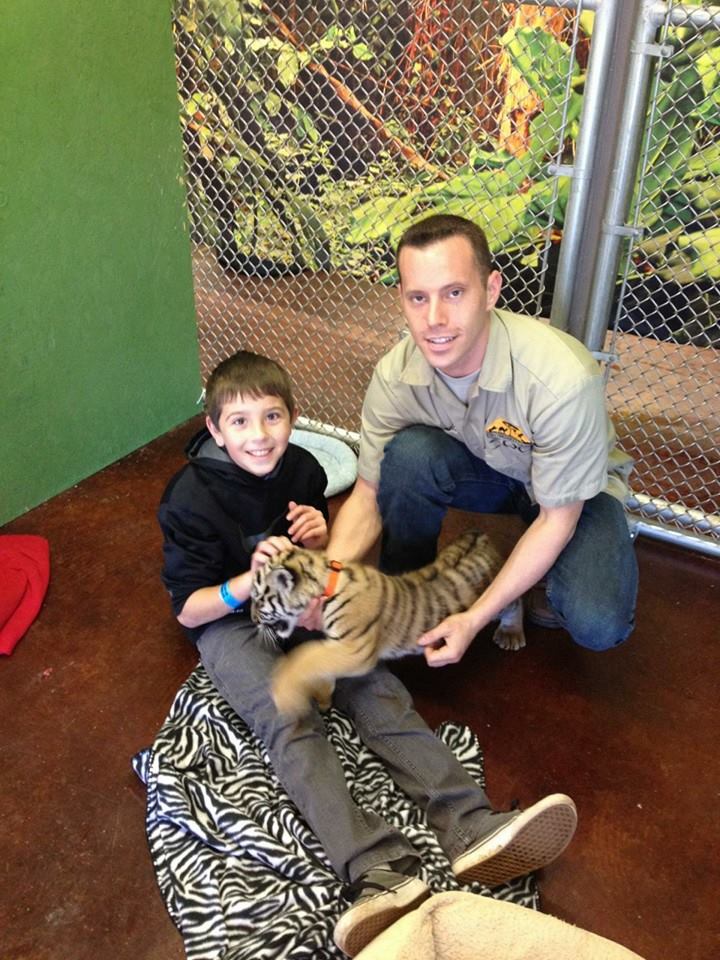 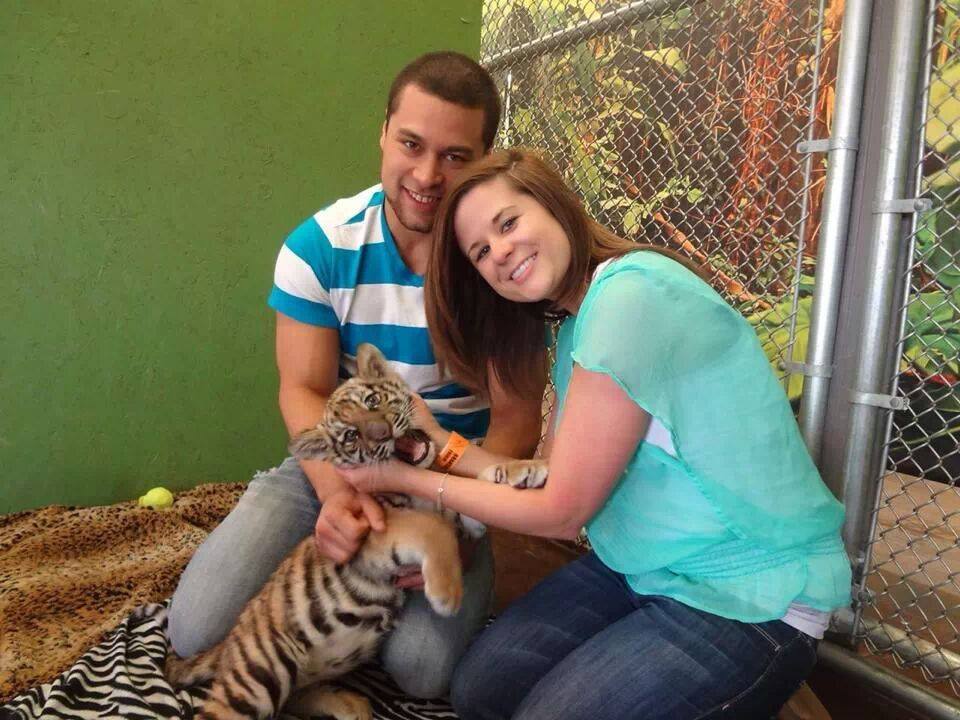 The Sanders, Remenars, and their many company names are also selling exotic animals on websites and social media under the name Eagle Rock Exotics. Eagle Rock Exotics sells “hoofstock, primates, cats and more” on ExoticAnimalsForSale.net. http://www.exoticanimalsforsale.net/animalbreeders/missouri-animal-breeders.asp.

Animals are sold into a variety of situations including allegedly being slaughtered for meat, the exotic pet trade, or performing animal companies. For example, there have been numerous situations of animals being sold online – sometimes even using Facebook (pictured). 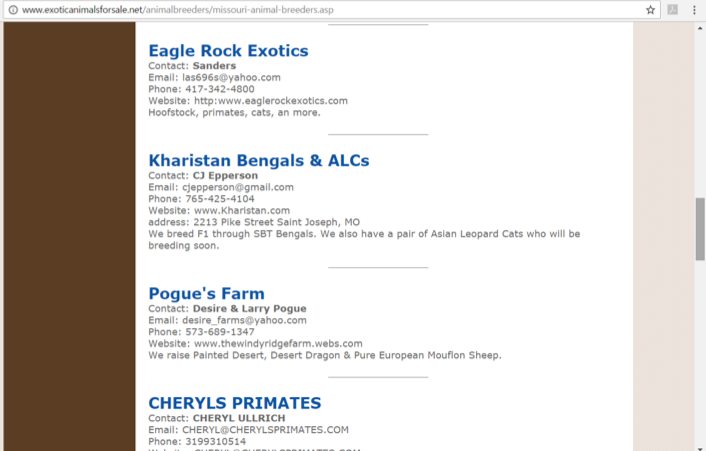 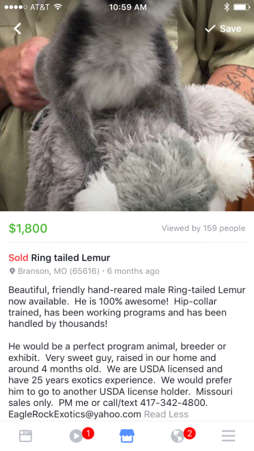 One lemur was sold into the pet trade to Libby and Robert Brozovich in 2008. No USDA license is listed under Brozovich on the USDA website, and if the Brozovichs don’t have a license that means there are no federal inspectors visiting their primates to ensure they are being properly cared for.

In 2007, Libby Brozovich was publicly accused of not taking care of her primates after she brought a monkey to public park where it bit at least two children (http://archive.columbiatribune.com/2007/nov/20071102News011.asp).

That means Promised Land Zoo sold a primate to the Brozovichs even after they had been in the news for their irresponsible and dangerous handling practices less than one year prior. (Libby’s husband, Robert Brozovich, is also named as a convicted sex offender in the article)

Eventually the lemur sold to the Brozovichs was finally donated to a sanctuary. By that point the current owners claimed the lemur had at least five different owners they were aware of before it finally found a permanent home. 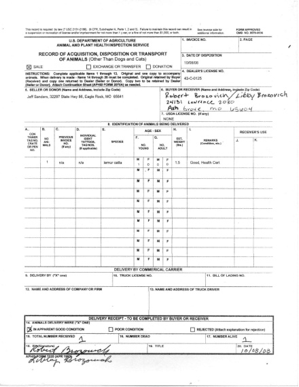 Another animal that was once owned by Promised Land Zoo was a sloth that later ended up with the Jeff Musial with Nickel City Reptiles and Exotics. Nickel City Reptiles uses animals as entertainment for TV shows, commercials, birthday parties and corporate events. Jeffrey Musial has been cited by the USDA for animal housing in disrepair, failure to keep a marmoset enclosure free of grime and debris, failing to maintain housing with an appropriate temperature after chinchillas were found in an aquarium in an 86 degree facility, failure to allow freedom of movement by housing two camels in 12×12 stall, failure to provide enough space for an African crested porcupine, and failure to maintain disposition and acquisition records on several animals. 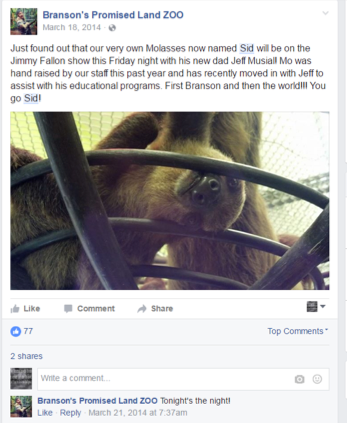 One USDA inspection reported stated that “the facility does not have disposition records for the cavy’s, palm civet’s, and genets that were sold.” (These records are a USDA licensing requirement.) This exposes their participation in the sale of exotic animals and makes it impossible for the USDA to track the animals if no records are maintained.

A variety of business and personal names have been used by the Sanders and Remenars on different USDA licenses and many licenses have accumulated violations. 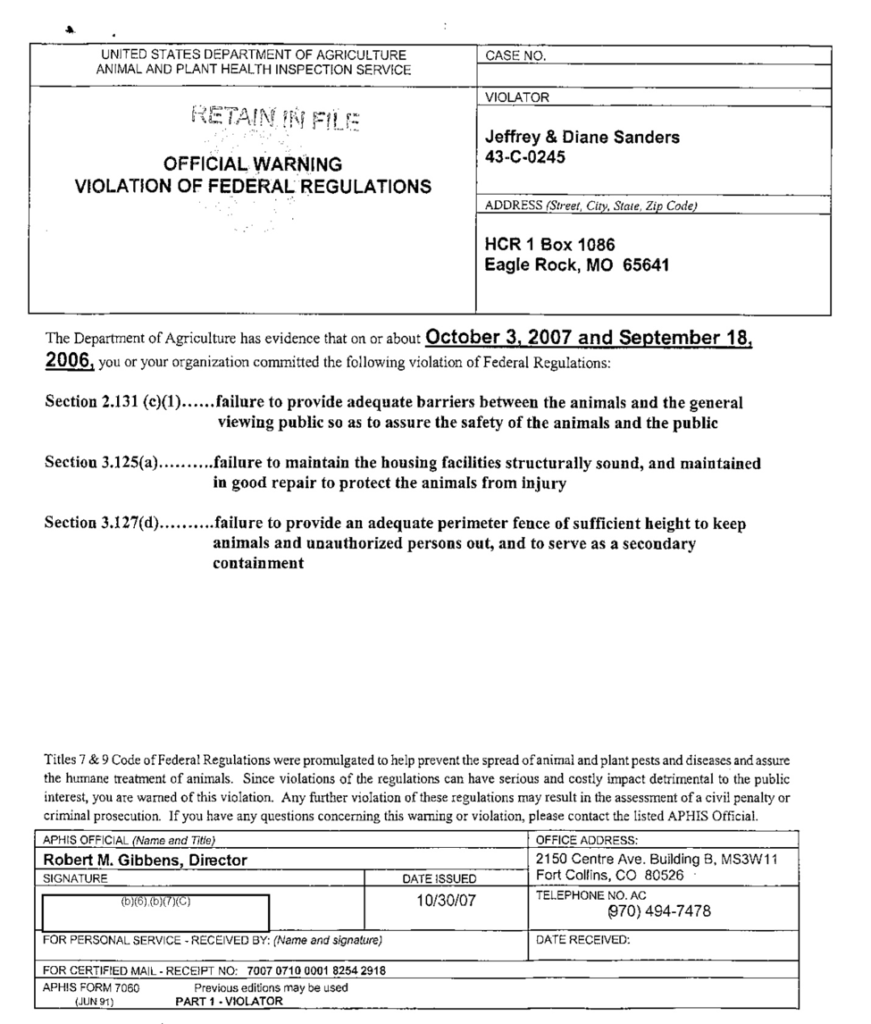 In March 2014, the facility was cited by the USDA for failure to have a knowledgable, adequately trained employee responsible for an adult lion and 7-week-old tiger cub during public exhibition.

FOIA request on Promised Land from 2014

When their license lapped with the USDA they continued to operate and be open to the public. (page 1)

Cited for not keeping a barrier between animals and the viewing public in 2013. (page 3)

Cited for no record of attending vet visits and no vet care plan, inadequate fencing, no program of environment enhancement for non-human primates, rodent feces present in feed storage building. 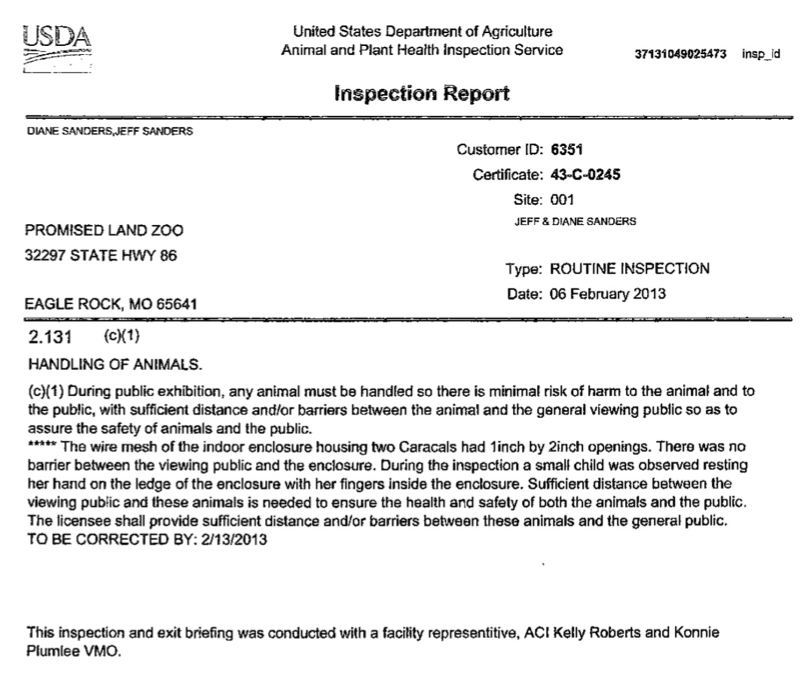 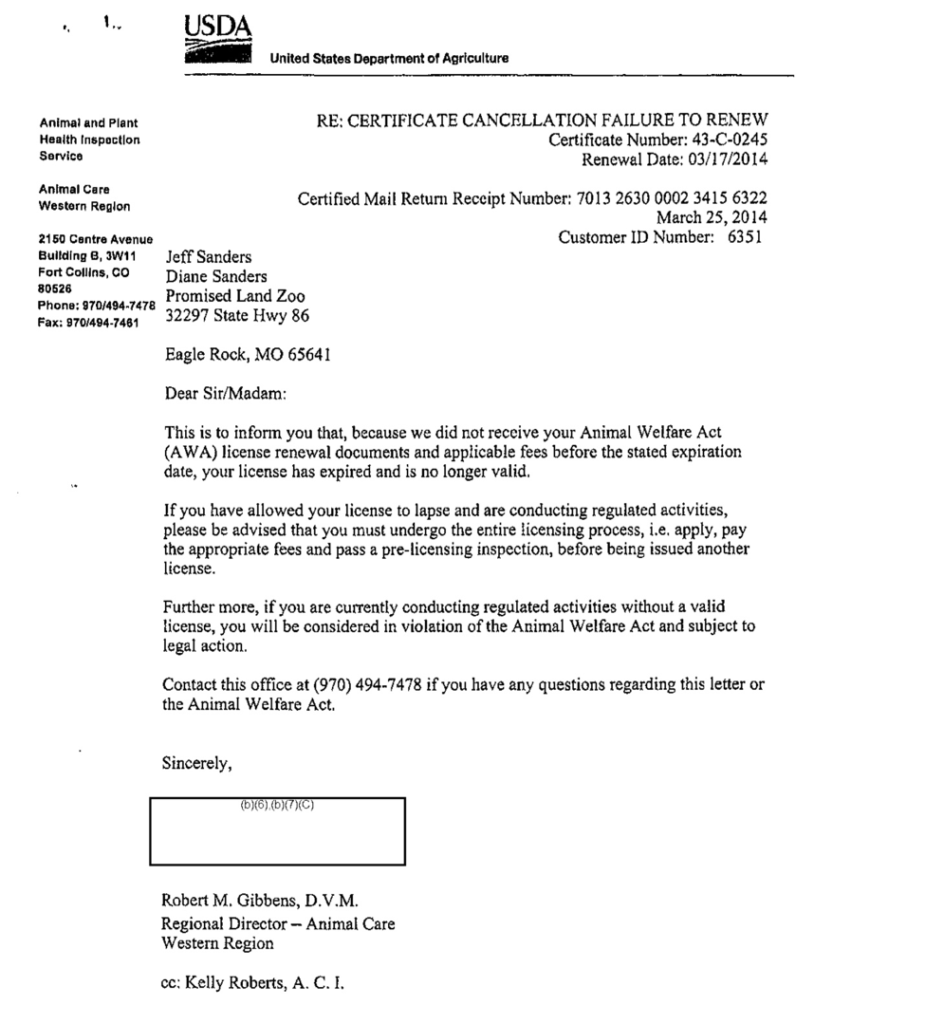 Cub Handling Images are What Drives the Trade in Big Cats

No legitimate sanctuary or zoo allows public contact with exotic cats.  These are a couple of  cub handling photos and posts on social media, including taking cubs to chamber meetings and media stations of Branson’s Promised Land Zoo using cubs to attract attention to themselves.

Serval on a leash being touched by swarm of kids 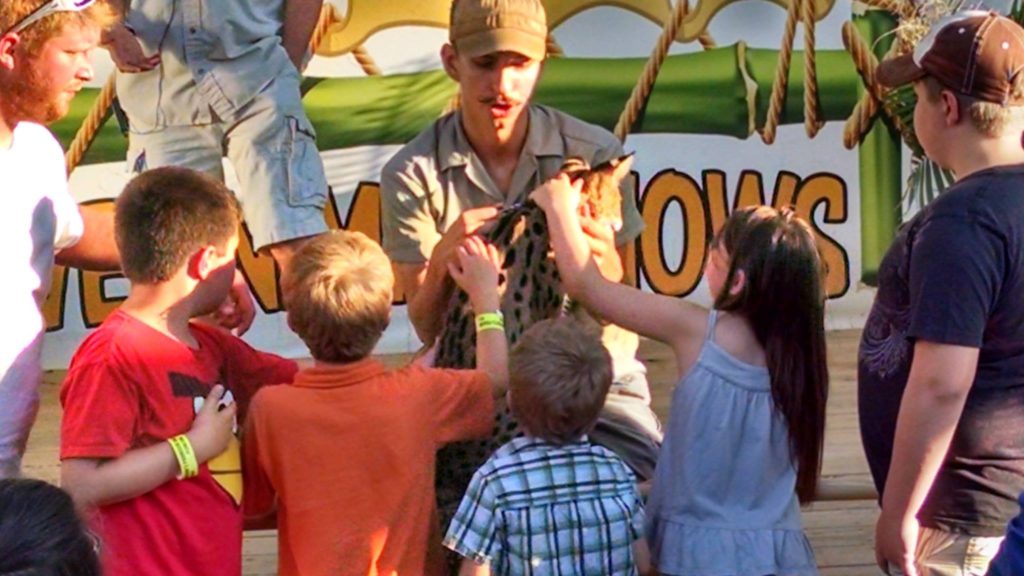 Conversation with a member of the public reporting that they raise their animals for meat and that animals don’t have rights. 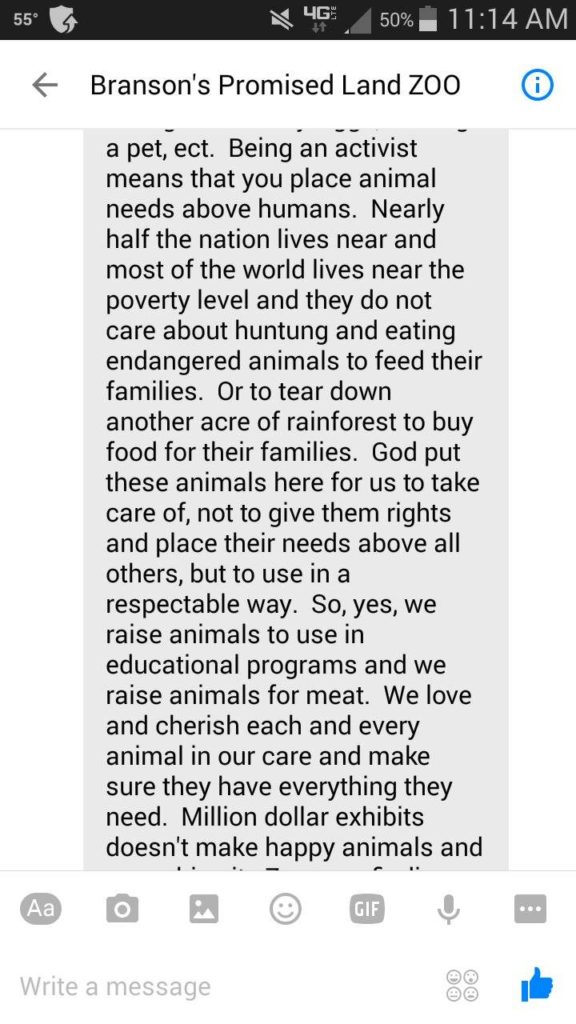 You have to ask why their mother cats all seem to reject their cubs? 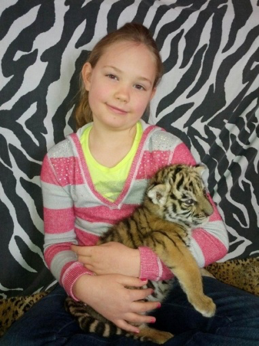 “Our newest addition to the zoo is…a baby Bengal Tiger! His name is Bruce Lee and he’ll be on exhibit throughout the day here in Branson.”

“Jungle Josh and the Amazing Aubrey on KOLR 10 this afternoon at 4pm or channel 27 with Bruce the Bengal Tiger!”

“Baby Bengal Tiger revealed at Promised Land Zoo
A baby Bengal tiger was revealed to the public at Promised Land Zoo on Saturday morning, much to the delight of a fascinated audience, who reacted with lots of “oohs and ahhhs” and interesting questions. “He is very special to us,” said “Jungle Josh” Remenar, Animal Exhibitions Manager at Promised Land Zoos. “This is a baby Bengal tiger, and his name is Bruce Lee,” he said, as the tiger scurried out of a kennel and onto the stage. Remenar allowed spectators to come to the edge of the stage without touching the tiger. “For a lot of you, this is as close as you’ll ever be to a tiger,” he said. “He is only six weeks old.” Remenar then revealed more news that excited the crowd. “On March 12, when he is old enough, we are going to start what we call Tiger Time. You’ll be able to hold the tiger and get a picture. We haven’t ironed out the details, but you’ll be able to play with the tiger for a short time, and your whole family will be able to take a picture with him,” he said. The audience was full of interesting questions: Will he live here his whole life? How large will he become? Where are his parents? “His mom is in northern Missouri. She did not want Bruce,” he explained. 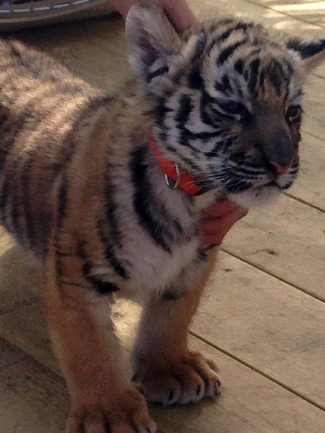 “The reason we are so proud of him is because tigers are going extinct very fast. There were originally nine sub-species of tigers. Three of them are now extinct completely, and one is extinct in the wild. Only in captivity are they alive. So that leaves five sub-species of tigers, and between all five sub-species, there’s less than 4,500 in the wild.”  “We would like to get started on a breeding program and try to keep this species alive,” he added.  According to Remenar, the tiger may get as large as 500 pounds, and within a couple of years, he will likely be moved to a larger facility. “When he is very large, he will probably go to our other park, which is 120 acres,” he said. Bruce Lee is now on exhibit at the zoo.  The Branson Promised Land Zoo is home to many rare and endangered animals and features big cats, monkeys, kangaroos, camels, zebras, reptiles, birds and other species from around the world. The zoo offers a foot safari, live animal shows, parakeet paradise, and bottle feedings, all included in admission. Also new for 2014 is a show hosted by Jungle Josh where visitors can pet, and in some cases, feed their favorite animals while learning more about them. The Zoo also hosts “Exclusive Animal Encounters” that allow guests hold a baby monkey, or to pet rare animals like two-toed sloths or kangaroos, for an additional fee. Guests may sign up for one of these unique experiences when they check in, or by calling Laura Remenar at 417-342-4800.  “Through interaction with some of the most exclusive animals on the planet, we are able to promote animal education and conservation of so many species that need our help,” she said. Each encounter comes with a tour of the nutrition center and meet-and-greet of the zoo show animals.  More information and zoo hours is available online at plzoo.com. The zoo is located at 2751 Shepherd of the Hills Expressway.
— By Michael J. Frost
mfrost@selectbranson.com 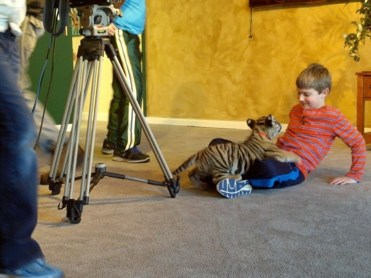 (shared by PLZ March 4, but posted by Laura Sanders March 3)

“Bruce prepping for his big TV debut. At kokr 10.”

“Jungle Josh, Buckaroo Brice and Bruce Lee the Baby Bengal Tiger on Power 96.5 today at 7am! Listen!! — in Springfield, MO.” 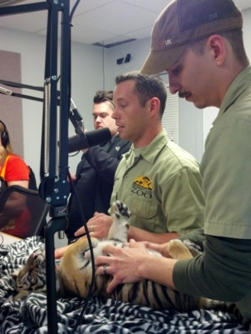 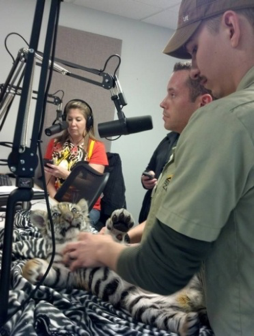 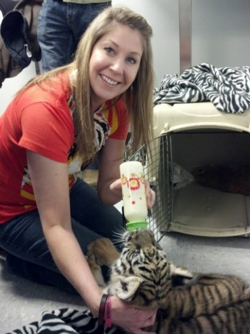 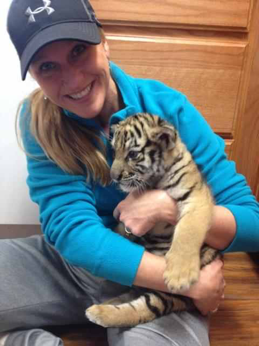 Jay Wohlert: Where did Bruce come from?

Branson’s Promised Land Zoo: His mother of course!  He was born in state during one of our polar vortexes and his mother did not take him!  Luckily, she was being monitored and Bruce was given a fighting chance! He’s now 7 weeks old and actually started eating solids just the other day. 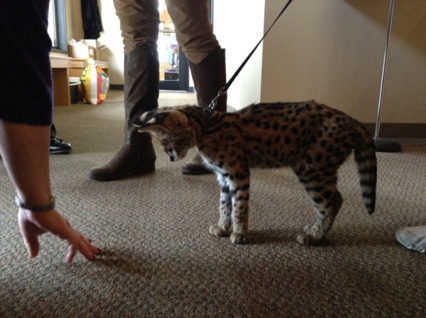 Want to put an end to these cruel pay to play schemes?  Take action at BigCatAct.com now!