This was a report from someone who visited Bitterroot Bobcats & Lynx owned by Barbara Roe at 3615 Hwy 93 North Stevensville, MT 59870.  Name withheld to protect their identity.

I answered an ad in the paper for free kittens. Went out there and they had a beautiful big cat in a 4×8 cage by the driveway in their property which they later told me they never let out.

These guys are mean and terrible people…I hope you can help those poor animals.  Thank you.

The Bitterroot Bobcats & Lynx USDA Inspections seem to indicate an utter lack of concern for the animals that they are breeding and selling.

In these reports you will find that they apparently lied about vet care, and their vet said they hadn’t seen the cats for EIGHT years.  One of the bobcats had been suffering from a broken leg without receiving any vet care.  Another bobcat had a kitten stuck in the birth canal for more than two days, before the owners managed to dart her adequately to be able to pull the kitten out.  The conditions describe an excess of urine and scent marking that is so thick it is like putty.

The saddest part is that USDA cites them, but has not confiscated the cats and has not fined them, so what is to stop them from continuing such treatment that many people would consider abuse? 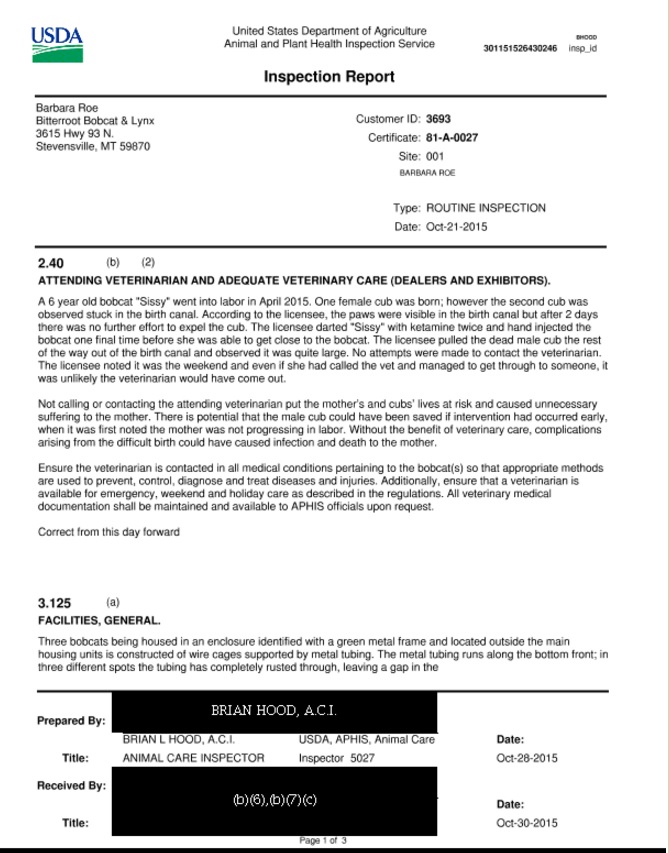 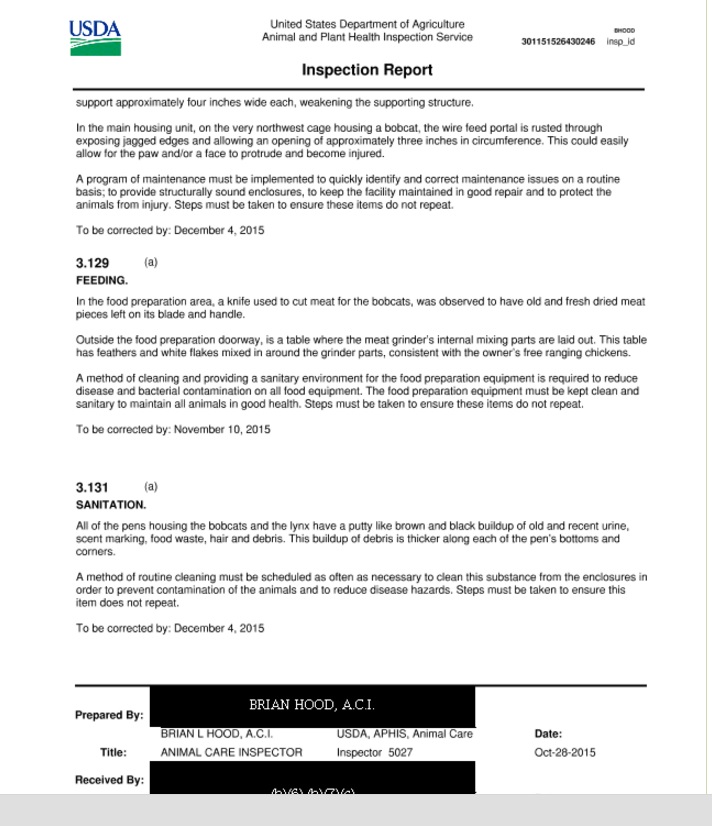 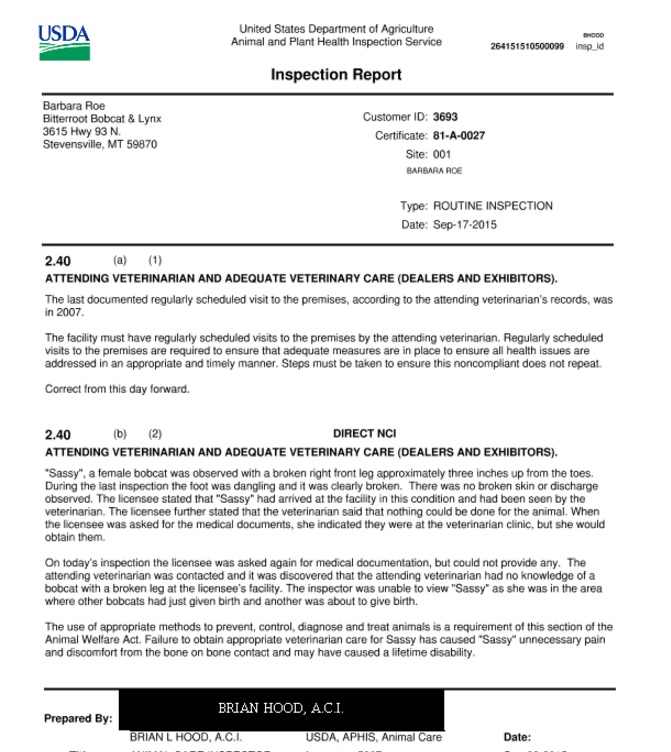 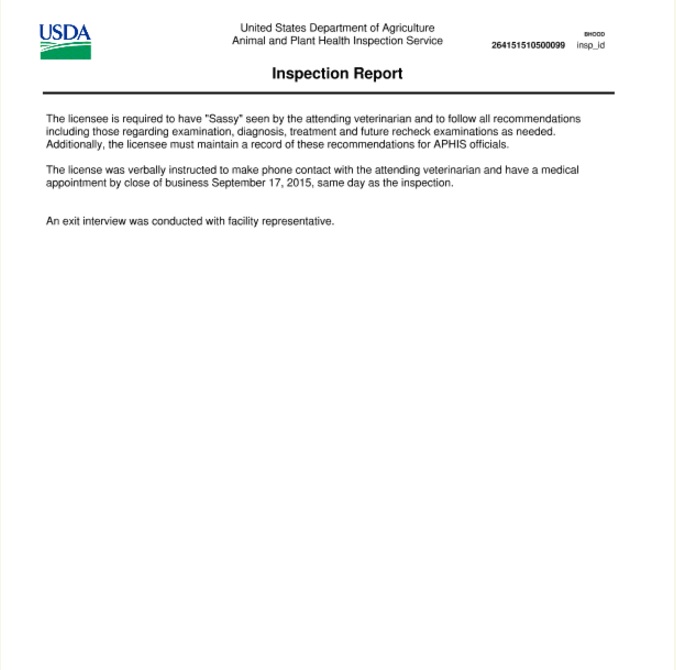 USDA tried to reinspect on Jan 14, 2016 but reported that they were unable to gain access.  Since there is no fine involved for doing it, the bad guys often just refuse to open the door for inspectors.  That is often much better for them than letting the inspectors in and getting bad write ups, like the ones above. 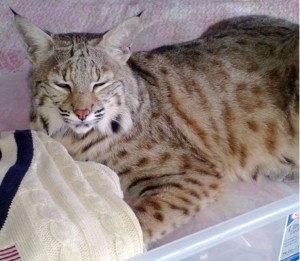 As a Stafford Township woman awaits the results of a blood test to determine whether her pet bobcat is a hybrid or purebred, questions have surfaced regarding the Montana breeder who sold the cat. Owner Ginny Fine says that Barbara Roe, owner of Bitterroot Bobcat and Lynx of North Stevensville, Montana, told her the animal she purchased three years ago is a hybrid feline, not a purebred bobcat. But that claim is being challenged by Carole Baskin, founder of Big Cat Rescue in Tampa, Florida.

Well, he was a baby when this whole ordeal started anyway…

Back in November of 2010 Big Cat Rescue was contacted by the RI State Vet, who was in the process of seizing a bobcat kitten that had been sold to a local man by the surname of Tardie, allegedly by a backyard breeder operating under the name of Bitterroot Bobcat and Lynx.  Barbara Roe claims on her site to have been breeding and selling bobcats and lynx as pets since 1985 and charges $1,500 and will ship, apparently, no questions asked.  If anyone cared about the law they would have quickly discovered that it is illegal to trade in bobcats in RI.

Big Cat Rescue was called upon to provide expert testimony to expose the breeders’ assertion, that bobcat and lynx make fine pets, to be the money motivated lie that it is.   The Rhode Island Department of Environmental Management tried to persuade the owner to release the bobcat to them so that they could send him out of state to a proper facility, but the owner insisted on fighting to the fullest extent of the law and through appellate court.  The bobcat, named Max, was just a kitten when this began and temporary custody was awarded to the state during the trials and appeals, which meant the young bobcat was sent to live with a veterinarian at her rehabilitation center.

Dr. Scott Marshall, the State Vet noted that, “Max has difficulty climbing things like a domestic cat would and he doesn’t seem to be able to use his claws.  They are present, we looked at them, but he doesn’t seem to be able to flex his digits.  We are curious as to whether he has had a tenotomy done as an alternative to declawing.  All 4 feet are the same.  This guy’s claws look normal, so I don’t know what to say about it.”  By now it was mid December and Max had grown to 15lbs.

Six months later the case has finally been settled and Max is a whopping 30 lbs of feisty bobcat.

Now that we have learned that the vet has said she hasn’t seen the Bitterroot Bobcats or Lynx since 2007 it makes us wonder just who attempted the botched declaw job on Max.