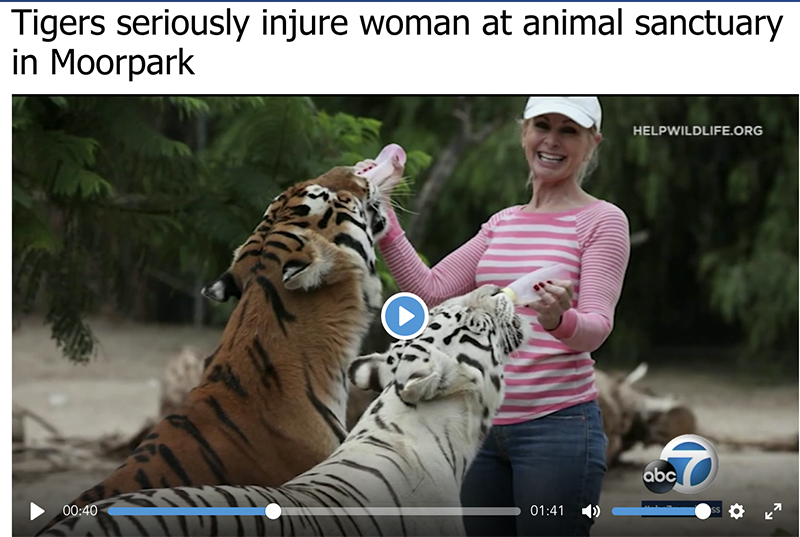 A wildlife conservationist was attacked and injured by several of her own tigers during an event at a wildlife sanctuary in southern California.

Patty Perry, founder of Wildlife Environmental Conservation (WEC) in Moorpark, California, suffered puncture wounds and several cuts after at least two of the tigers attacked her during a special event for donors.

“They began to play with her and the Bengal took both paws and wrapped them around her legs. She fell on the ground and another tiger jumped on her and began to pull on her before they got her out and she got some lacerations,” said friend and WEC attorney Michael Bradbury to ABC News’ Los Angeles station KABC.

Witnesses, including several members of the fire department, rushed to Perry’s aid during the attack.

“A lot of people I’m sure that saw it were horrified thinking the worst.” said Bradbury. Perry has 50 animals at the facility including zebras, birds, and leopards. “We use live animal ambassadors for our outreach programs.”

Bradbury told KABC that animal control is aware of the incident but does not expect anything to happen.

“It’s never happened before. She’s … been with those tigers, you know, on hundreds and hundreds of occasions and gone through the same kind of routine virtually daily,” Bradbury said.

Bradbury says as soon as Perry is released from the hospital and the investigation concludes, she will be right back doing her normal routine with the animals again. Full story.

Judging by the washed out colors, commonly referred to as strawberry, red, snow or white it looks to us like she’s just another enabler of the tiger cub petting scheme at Antle’s place in Myrtle Beach, SC. If anyone can prove a paper trail from T.I.G.E.R.S. / Preservation Station to Patty Perry, please advise in the comments. After 2016 it became illegal for USDA licensees to sell to each other without obtaining a Captive Bred Wildlife permit from the US Fish and Wildlife Service. If their transactions were legal, they should have no problem offering up the permits and licenses as proof. We know that PETA had opposed Patty Perry’s attempts to purchase endangered species because of this filing, but are not sure of the outcome: https://secure.mediapeta.com/peta/PDF/CommentsfromPETAOpposingPRT-75313B.pdf

We think endangering the public and the cats is NOT appropriate and Bradbury’s attitude about tigers “loving her” shows her lack of understanding. What do you think?