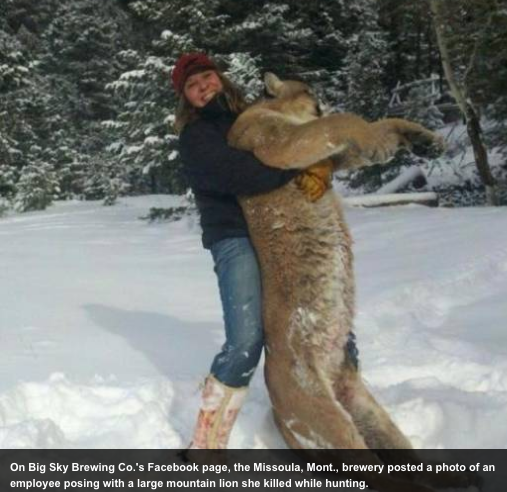 Prized by hunters, despised by farmers, mountain lions once roamed nearly all the U.S.

Conservation group estimates about 30,000 mountain lions in the West

The photo features a female Big Sky employee posing with a large mountain lion she recently bagged during hunting season.

Facebook users shared the photo, posted Dec. 15, more than 90 times, and it had more than 400 “likes” as of Friday afternoon.

BLOG: Cougar killed in Conn. had walked from S.D.

But not everyone who saw the photo liked it very much. Of about 300 comments on the photo, many expressed dismay at the popular craft brewery’s decision to post the hunting photo on its Facebook page.

“Really Big Sky?” wrote Facebook user Brett Kvo. “Hunting for food is one thing; killing for fun and then parading it on the Internet is another. I think I’ll take my business elsewhere. …”

Neal Leathers, co-founder and president of the Missoula, Mont., brewery, said he and his staff were caught off guard by the strong reaction to the photo.

“You never know when something is going to get a whole bunch of attention for whatever reason,” Leathers said Thursday.

Facebook user Britt Murphy wrote: “What a sad end to such a noble creatures (sic) life, made even more pathetic w/an empty show of celebration & Total lack of respect for the Spirit of such a Magical King of beasts.” The activist group Defenders of Wildlife estimates that 30,000 mountain lions, also called cougars, pumas and panthers, live in the western United States.

Other commenters, offended by the photo, called for a boycott of Big Sky beer.

“New boycott for me … this photo is gross,” Facebook user Laurienne Riley wrote.

“I looked up all of their products online and will delightedly boycott each one,” Facebook user Amy Arkebauer Cesar wrote.

Others were impressed with the trophy cat.

“I love it. Thanks for the great pic,” Facebook user Linzy Cotham wrote. “I am a houndsman and know the work that is involved. It takes a lot of hard work to get something like that. Its not golf or tennis but some of us love it.”

Still others used the post as an opportunity to debate the merits and evils of hunting big predators such as mountain lions.

“You may not like the photo but there’s a scientific reason for it. It’s called science-based state management,” wrote Mark Holyoak, public relations director for the Missoula-based Rocky Mountain Elk Foundation. “The issuing of tags for predators helps keep ALL wild game in check, plus it lessens human confrontations.”

“Unfortunately, I have to side with those opposed to the photo,” wrote Facebook user Max Thompson. “I’m not opposed to hunting, but the photo itself is in poor taste — certainly not respectful of the animal. In my opinion images like this do more harm to hunting than good — and I say this as a lifelong hunter and devout meat eater.”

And then there were Facebook users like Bruce Roberts who didn’t take a position on the photo or the ethics of hunting big cats for trophies but thought the company made an unwise decision to post the photo on the company’s Facebook page.

“Regardless of one’s thoughts about the image, it amazes me that any company could be so lacking in good business sense that they would purposely alienate (and lose, based on many of the comments) a good portion of their customer base by posting this photo on their business’s page,” Roberts wrote.

Leathers said company staff are avid recreationists who often post photos of themselves doing activities, such as back-country skiing, hiking and sometimes hunting.

The company responded to the comments in a statement on Facebook:

“Thank you for all the comments. We sincerely apologize to anyone offended by the image in this post. We’re a company deeply rooted in recreation, and in the state of Montana this includes hunting. The individual pictured is an employee and we salute her efforts, just as we salute yours, no matter what they may be.”

Leathers said he has no intentions of removing the photo.

“We’re letting it play out,” he said.