Mario Tabraue says, with his own lips at about the 14 minute mark of Episode 2 of Tiger King, Murder, Mayhem and Madness:

“People like Carole Baskins use me as the poster child; I shouldn’t have animals because I was a convicted felon but I did my time for what I did… Sometimes they say that I’m the prototype for Scarface…I got to the point where I was on the phone saying, “Mario’s Drugstore, specializing in marijuana, cocaine and quaaludes, anybody interested, come and get it, including you, Metro Dade Organized Crime Bureau.”  They got me on tape.”

“His name was Larry Nash.  He was an AFT informant.  A guy who worked for me shot him and they panicked and dumped him on my farm.  I had a crazier partner than me who said, “Let’s just cut him up and burn him.” So we burned him.”

“You know, I really didn’t even do most of the stuff but I carry the stigma of it.  What am I going to tell the feds now, or the judge? “Your honor, I did not shoot him, and I did not use the circular saw on his neck.  It was somebody else.”  What difference does it make?  I was still there.”

He didn’t win an appeal in the sense that you’d think from that statement.

The Associated Press reported in the Tampa Tribune on Aug. 20, 2000 (republished 9/27/2005) that Tabraue’s sentence was reduced from 100 years to 12 for becoming an informant himself.  https://www.tampabay.com/archive/2000/08/28/information-frees-drug-kingpin/

A drug trafficker who once hacked a federal informant’s body to pieces is free after serving only 12 years of a 100-year sentence for helping convict other narcotics traders.

But Assistant U.S. Attorney M. Patrick Sullivan said Tabraue deserved a reduced sentence because his testimony helped build cases against murderers, high-level drug traffickers and money launderers. His help was apparently so valuable prosecutors ignored their own rules that informants’ sentences should not be reduced by more than half.

For privacy reasons Vimeo needs your permission to be loaded.
I Accept

This has bothered me for a while. Why has the media, and much of the uninformed public, insisted that I murdered Don Lewis when there is NO evidence that Don was murdered? All of the evidence points to him crashing a small plane into the Gulf and yet if you google “don lewis murder” there are 56,700,000 results. I believe it’s the Tiger King, Murder, Mayhem and Madness narrative driving that, but there was a spouse of a Tiger King character who actually was executed by being shot 9 times, named Maria Tabraue. This murder was just a year before the Larry Nash murder who Tabraue says in Tiger King that he helped hide. When you google “maria tabraue murder” there are a mere 24,400 results. I can understand armchair detectives loving to insert themselves in cold cases but why is Maria’s actual murder of no interest to all of those who have resorted to making up lies to try and frame me for Don’s disappearance? Where is her justice? 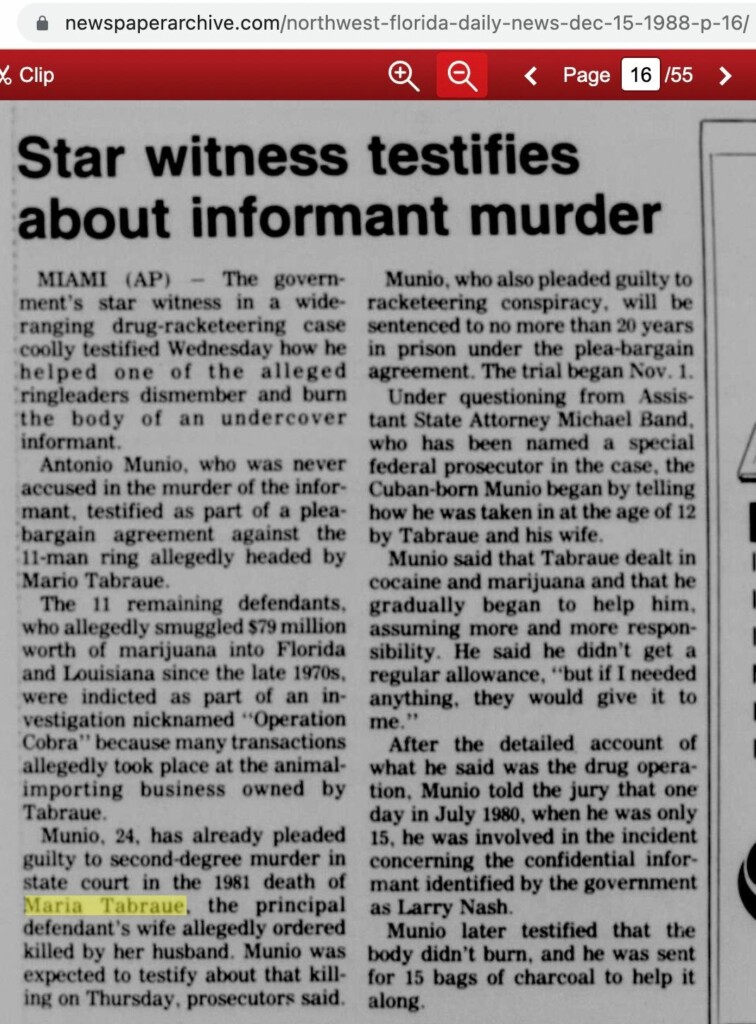 In this article it says, “Munio, 24, has already pleaded guilty to second-degree murder in the state court in the 1981 death of Maria Tabraue, the principal defendant’s wife allegedly ordered killed by her husband.  (Mario Tabraue) so why does the article say allegedly?  What was the result of that trial?  Why hasn’t anyone bothered to pull up the case before using Mario Tabraue as a character witness against the woman trying to end his exploitation of big cats and their cubs?

Why Don’t Citations Result in Any Punitive Action?

In this article, Debbie Metzler, PETA Foundation: “These are dangerous, wild animals. They should not be allowed to have interactions with the public.”  It’s those interactions that led federal regulators to hit ZWF with two critical citations for violations of the Animal Welfare Act.

Debbie Metzler: “It is noteworthy that it was critical. It wasn’t just a normal violation. It was categorized as something extremely egregious.”

According to a USDA inspection report, a picture in March 2021 posted on social media showed “…a guest petting a juvenile lion, over 16 weeks of age. Handling of big cats over the age of 16 weeks pose a risk of injury to the public.”

In October of last year (2020 during the height of the COVID pandemic), the report says, “…a guest was bitten by a lion cub” during an animal interaction.  Also last year (2020), the Florida Fish and Wildlife Conservation Commission issued a written warning after a child was bitten by a chimpanzee named Limbani.

In 2017 a Volunteer said, “When I saw her canine latched into my skin, like, I saw it inside my skin. I was like, ‘Oh, no.’”  7News interviewed a zoo volunteer who was left with a bloody finger after, she says, a capuchin monkey bit down on her and would not let go.  “The owner informed us today, now, after everything, after my two months of being there, that the protocol would be to call him, that I should have never left the property. My finger could be super infected, it could be dangling off, and I have to stay at the property to wait for you.”  The FWC said there were no violations at the time, and the monkey could stay at the property.

Think it would be cool to touch a cub?  Then you might be interested in this shocking online review of the infamous Zoological Wildlife Foundation in Miami. In December, a family’s vacation was ruined when a large tiger cub that was “not under control” attacked their young daughter, biting her on the leg and sending her to the hospital with a nasty wound which required three stitches. The family posted photos of the girl’s injuries as well as the exact moment the cub attacked her. 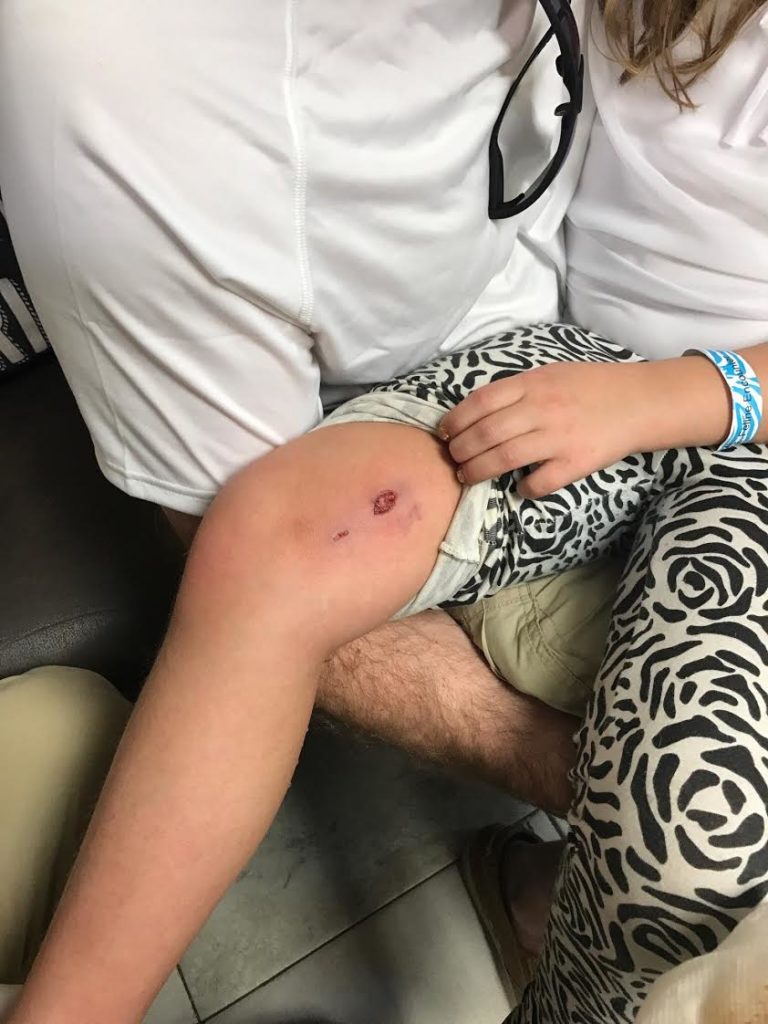 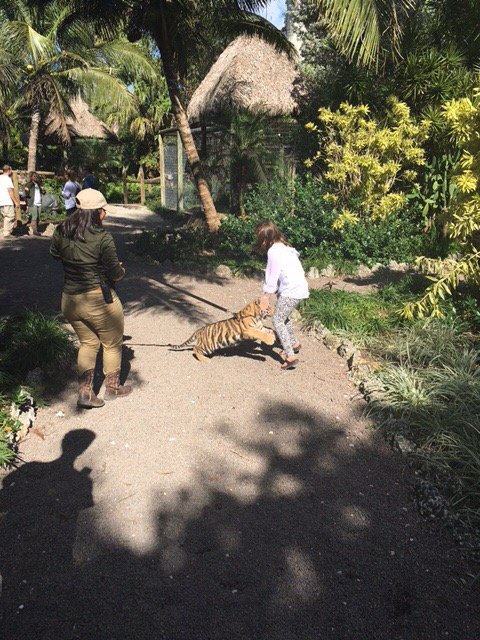 The ZWF is on 4.87 acres and as of 2018 there were 30 big cats (lions, ligers, leopards, snow leopard, and jaguars) along with a chimp and numerous other primates.

USDA Citation and Fine against Zoological Wildlife Foundation in 2015

2018-OCT This inspection states there are

May 10, 2009 As an example of where Antle’s tigers end up, in AWA Docket No. 09-0085 the judge found that Bhagavan Antle released two tigers to Ray Thunderhawk, who had already lost his USDA license and who had abandoned 75 tigers in Palm Bay, Florida. Thunderhawk ran a “pay to play” operation whereby patrons pay to pet and pose with big cats and he took the two tigers from Antle in S.C. to Boston before taking them to the buyer in Miami.

The buyer was Mario S. Tabruae of Zoological Imports 2000 located at 16225 SW 172 Av Miami, FL 33187. Tabruae admitted to falsifying records to make it look as if he had purchased directly from Antle and that Antle had delivered the tigers. Dec 12, 1987 New York Times reports that Mario S.Tabruae was arrested for:

“A drug-smuggling ring that killed an informer and cut up his body while trafficking in a half-million pounds of marijuana has been broken, the Federal authorities said today. The ring also bribed police officers to protect their operation, said Richard Gregorie, the chief assistant United States Attorney here. At one time, the indictment charged, members of the ring used Miami police officers to collect, count and disburse drug profits. 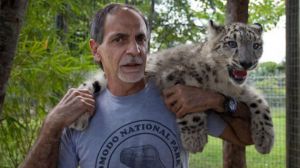 The ring operated for at least 10 years, smuggling the marijuana, along with some cocaine, into Louisiana and Florida, Mr. Gregorie said. Six of the seven people indicted in the case were arrested here by a special Federal law-enforcement group combatting drug smuggling. The seventh was in custody in another state. $50,000 Caught by Agent Among those arrested were the men who the authorities said headed the ring, Mario Tabraue and his father, Guillermo. When the men were arrested at their homes in Dade County, Mario Tabraue’s wife tossed a bundle of $50,000 in cash out the back window, said Lloyd E. Dean, an agent of the Federal Bureau of Investigation here. The money was caught by a Federal agent, Mr. Dean said.” 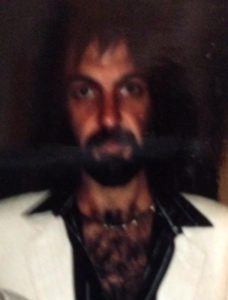