KERRVILLE — In the latest courtroom clash over an Ingram-area animal shelter that Kerr County Attorney Rob Henneke has fought since June to close, a judge declined Wednesday to fine or jail shelter officials and lawyers accused of contempt.

A December trial is slated in the lawsuit that Henneke filed in a bid to force Clint and Amy Tuma to comply with county rules for keeping wild and dangerous animals.

The Tumas contend they’re exempt from its rules by virtue of incorporating as an animal shelter called Hatari Safari. Even so, they later applied for a county permit and were denied.

Their defense is cast as legal fiction by Henneke who, if he prevails at trial, plans to seek civil penalties against the Tumas of up to $2,000 per animal per day of violation.

At Wednesday’s pretrial hearing, Henneke claimed the Tumas violated court orders in August by adding a bobcat to the menagerie at their home off Texas 27 that already included three cougars, two tigers and a bear.

State District Judge Rex Emerson likened getting the bobcat to the Tumas throwing gas on a fire, but said he couldn’t sanction them because the 4th Court of Appeals had stayed his two orders that directed the Tumas to remove their wild animals.

Henneke also wanted the Tumas sanctioned for refusing to produce records on Clint Tuma’s work as a professional hunting guide, which defense lawyers called immaterial to the shelter dispute.

Henneke said videos of “X-rated kill shots” from Tuma hunts would let jurors see “the real picture” of the couple who have spoken of giving sanctuary to old, sick and abandoned animals.

Tuma lawyer April Lucas said the video should be barred as evidence because “it’s sought basically to try to prejudice people (on the jury.)”

He cautioned Henneke about casually seeking sanctions, but denied a motion from Lucas and co-counsel Emily Frost to be reimbursed for legal expenses incurred defending themselves against Henneke’s contempt motions.

Among the spectators were Tuma neighbors Mary Alice and Emilio Valdez, who say they now carry a gun when they’re outdoors due to fear of being mauled.

“It’s like living next door to terrorists,” said Mary Alice Valdez, 63. “You don’t know when you’re going to be attacked.”

In 2009 they hired Henneke’s father, former County Judge Fred Henneke, to represent them in a dispute over a fence the Tumas planned to construct.

Separate from the suit, the county has issued 30 misdemeanor citations to the Tumas for housing unregistered wild animals.

See the video of tiny, barren cages and the authorities speaking to the danger of having wild animals in inappropriate surroundings.

Amy Tuma said in Friday’s hearing that she had a grizzly bear cub living in her home since April and that the cages housing some of the animals were still under construction.

A state district judge on Friday ordered a Kerr County couple to remove several wild animals from their 10-acre property within 48 hours, but the couple has vowed to fight the ruling.

Kerr County Attorney Robert Henneke had obtained a temporary restraining order against the Tumas on June 15 following complaints from neighbors that they possessed unregistered wild animals.

“Under the Texas Health and Safety Code, a person may not have custody or control of a dangerous wild animal for any purpose unless the person holds a certificate of registration,” Henneke said in a statement at the time.

Tuma says he and his wife were in the process of becoming a nonprofit corporation, which they contend would have meant their animal sanctuary would be governed by the state, not Kerr County.

Both sides presented evidence at the hearing on Friday, but the judge ultimately sided with Henneke.

Tuma complained that the county attorney kept his wife on the stand for more than an hour, and kept repeating that the animals were a “time bomb ready to go off.” He characterized the pair of tigers and pair of mountain lions as “geriatric,” “antique” and lazy to boot.

“Henneke has a personal vendetta against me,” Tuma said. “He’s just a young guy trying to make a name for himself.”

He accused Henneke of revoking the one permit he did have, for a 3-year-old mountain lion, and for demanding the removal of his daughter’s pet Bengal house cat.

Henneke couldn’t be reached for comment on Sunday afternoon.

Tuma said he is now applying for a permit from the U.S. Department of Agriculture, which he said regulates animal sanctuaries open to the public.

During Friday’s hearing, Amy Tuma testified she has had a grizzly cub living in her home since April, that the cages housing the tigers and mountain lions were still under construction and the property is surrounded by an 8-foot fence the animals could jump over, according to a release from Henneke’s office.

Clint Tuma, a wild game trapper and big cat handler for 30 years, said he feeds the cats from scraps given to him by local game processing plants.

District Judge Rex Emerson denied several motions from Kerr County Attorney Rob Henneke Wednesday in the ongoing legal wrangling with Clint and Amy Tuma, including Henneke’s request to admit information about the Tumas’ hunting business into evidence at their trial next month.

Along with denying the motion about the hunting business, Emerson also denied an attempt to have the Tumas’ attorneys, Emily Frost and April Lucas, sanctioned with fines or incarceration because the Tumas took in a bobcat in August.

He did, however, grant a motion from Henneke to retake a deposition of the Tumas’ veterinarian, Dr. Patrick O’Neil, after Emerson found conversations between O’Neil and Lucas before and during the deposition on Oct. 15 did not fall under attorney-client privilege, as was argued by Lucas.

Since July, the 4th Court of Appeals and the 198th District Court has granted and then suspended several orders relating to the removal of the animals currently on the Tumas’ property.

Emerson said the Tumas violated the intent of the order after they brought the bobcat, also listed as a wild and dangerous animal under the statute, to their home in the midst of an ongoing lawsuit.

“The Tumas threw gasoline on an already burning fire,” Emerson told their attorneys. “I would fall back that it is a little disingenuous on your clients’ part. It is probably fair to say there is confusion because of the orders between this court and the 4th Court of Appeals.”

Emerson told Henneke that asking for sanctions of fines and jail time against opposing council only should be used as a last resort.

Henneke said he wanted to seek evidence about the Tumas’ hunting business and how it related to them keeping wild animals at their home under the guise of an animal sanctuary.

Lucas responded that the Tumas’ hunting business was in no way relevant to the current lawsuit to decide whether the Tumas are an animal sanctuary and therefore are not governed by county statutes governing dangerous wild animals.

“None of those activities have anything to do with hunting,” Lucas said. “Hunting is not among the issues in the lawsuit … (Henneke) wants to invite the jury to dislike the Tumas based on acts that have no relevance to the case. (The information) is sought to prejudice people. This is a direct attack on the business of my clients.”

“That is overreaching to the point of abuse,” Lucas said. “This motion to compel seeks information about another business, saying hunters can’t be friendly, loving people that care for animals.”

Henneke said he wanted to know what the Tumas were doing with the animals they keep at their home.

“It’s hard to say what the Tumas are in this lawsuit without knowing what they are doing with these animals,” he said in his arguments that the hunting business was relevant. “How are they treating these animals?”

Emerson said he was not going to “cloud the issue” by bringing into account the hunting business.

“Just because they are two different businesses does not mean they are Jekyll and Hyde,” Emerson said when denying the motion. “It just means they own two businesses.”

The case is scheduled to go to trial on Dec. 7.

Headhunters Hunt Texas is a business owned by Clint Tuma and, not surprisingly, his logo is the head of a cougar. How are some cougars his “pets” and others his “trophies?”

A couple of years back, I started hunting on a ranch in Texas called Valhalla with outfitter Clint Tuma and his organization, Headhunters. His ranch is located about 3 miles “as the crow flies” from the old YO Ranch (one of the first high-fenced ranches established in Texas). Valhalla consists of 640 acres, 100 of which are high-fenced.

From my understanding there have been a large number of animals that have escaped other ranches over the years and multiplied. The species include axis, blackbuck, red stag, fallow and sika. The first time I went to Valhalla, I noticed that Clint feeds the animals bales of alfalfa and corn. (baiting animals into easy target range) In the evenings when we scouted around I saw many different species free-ranging and some good, quality trophies. 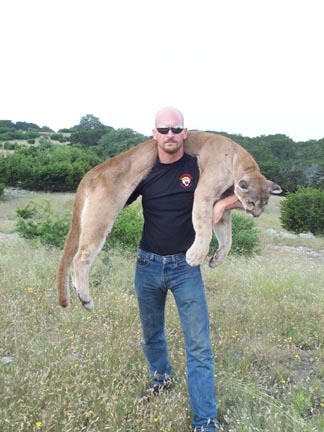