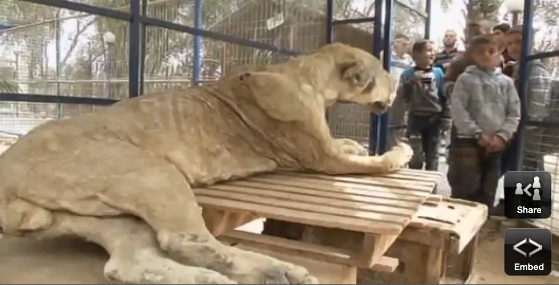 The lion may have starved to death in 2009 but this has not prevented Gaza’s Khan Yunis zoo from exhibiting its emaciated body.

Video at link below

Using rudimentary taxidermy techniques learnt on the internet, the impoverished Palestinian zoo has stuffed the mangy cat, which died during an Israeli incursion, along with a monkey missing an eye and several limbs and a porcupine, which suffered a hole to its head during a botched mummification attempt.

The park’s owner Mohamed Awaida, who has no veterinary training, has so far embalmed 10 animals that died as a result of disease, hunger and neglect with an improvised formula of sawdust and formaldehyde. The stuffed corpses now form a macabre display beside the 65 animals still living at the zoo, including an ostrich, a tiger and deer.

“The idea to mummify animals started after the Gaza war because a number of animals like the lion, the tiger, monkeys and crocodiles died,” Mr Awaida explained. ‘So we asked around and we learned from the web how to start.’

Both living and dead animals are kept in makeshift cages constructed from shippings crates and the remnants of Israeli settlements dismantled in 2005, littered with sweet rappers and fizzy drink cans.

Mr Awaida, who opened the ‘South Forest Park’ in 2007, told the Associated Press that he lost several of his prized exhibits during Israel’s 2009 incursion into the Palestinian territory, Operation Cast Lead, when the now stuffed lion and monkey died from starvation when the zoo was abandoned.

This improvisation is the latest solution dreamt up by Gaza’s five zoos to avoid the hefty costs of importing new animals. In 2009, another zoo in Gaza City resorted to painting a donkey with zebra stripes to replace two zebras killed during the Israeli offensive, which it could not afford to replace.

When militant group Hamas took control of the Gaza Strip in 2007, Israel closed the Palestinian enclave’s air, land and sea borders leaving zoo owners no option but to bring exotic animals through tunnels from Egypt.

Conditions for those who reached Khan Yunis wildlife park are particularly grim. There is no zoo keeper on the premises, so sick animals are treated remotely over the phone by vets in Egypt. Yet it is one of the overcrowded, besieged region’s few public attractions.

Dr Saud Shawa, who runs a private veterinary clinic in Gaza City, blames both the Israeli blockade, which has let to a shortage of vaccines, and negligence on the part of Gaza’s authorities for the animals’ woeful condition.

“The animals brought through the tunnels from Egypt without any supervision or veterinary control and are often already sick. There is a critical shortage of vaccines here, many are completely unavailable. This along with the ignorance of people keeping these animals without any training in animal welfare [are to blame],” Dr Shawa explains.

“But at least some of the animals are still healthy, despite the difficulties we face here. We are doing our best with the limited facilities we have.”