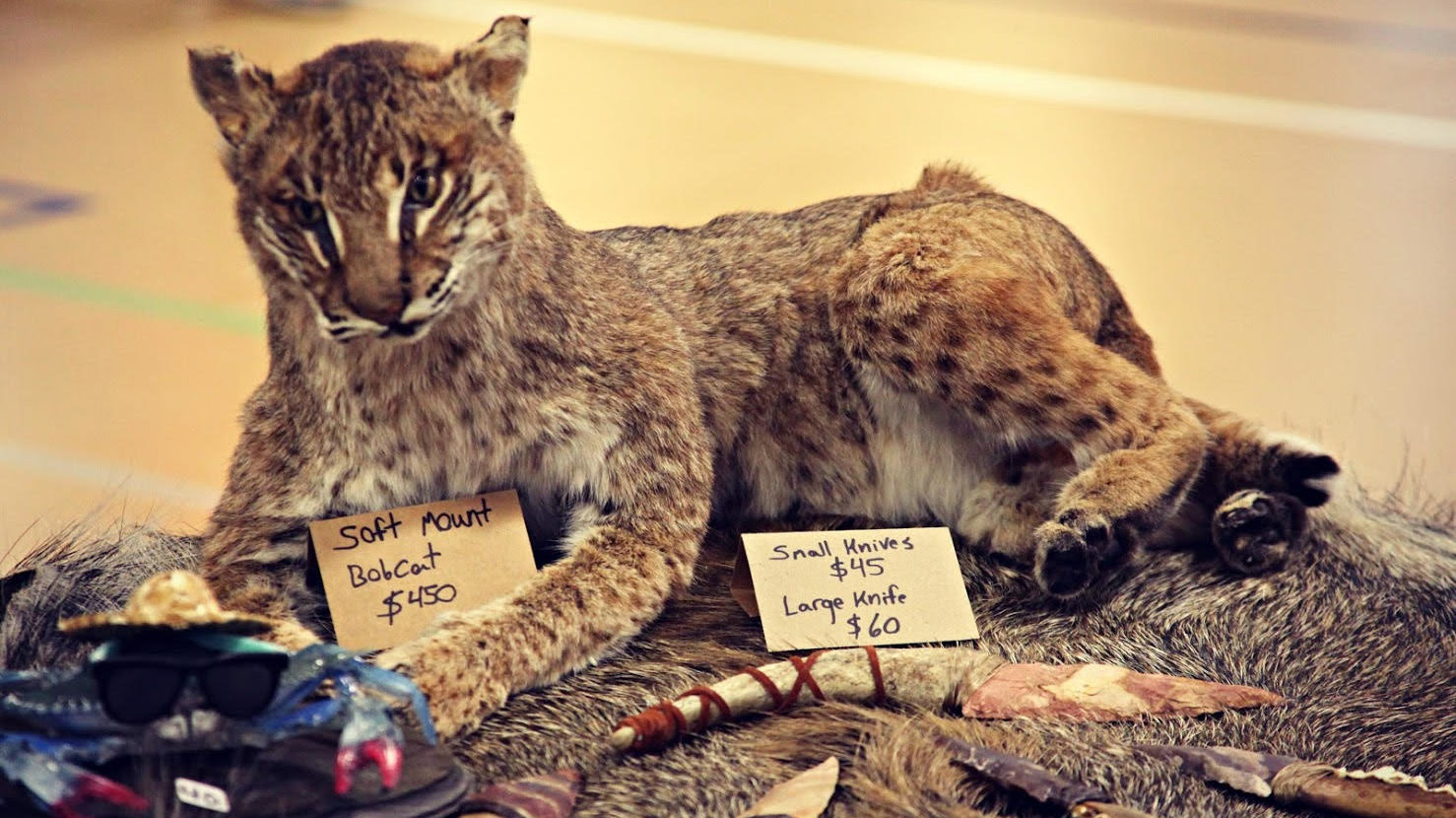 This breeder and seller of exotic cats and many other animals came onto our radar in June 2019 when we were alerted that the Fraziers were hosting an exotic pet expo  in Dandridge, Tennessee. Here are more than 90 photos from this expo can be found here. Disturbingly, one vendor was selling a taxidermied bobcat as one of the “products” on offer:

Frazier Farms Exotics is a major national breeder/broker of exotic animals based in Bybee, TN. They have over 100,000 Facebook followers and appear to be among the kingpins of the US exotic animal trade, but little is known about them and they seem to have somehow escaped the notice of animal welfare watchdogs so far.

Frazier Farms is owned and operated by Michael, Crystal, and Darrell W. Frazier, who clearly view animals as nothing more than commodities to be bought and sold for profit (they often refer to them online as “product”). The Fraziers believe that it should be a “right” for anyone to own any animal they want, and according to their listing on an exotic animal breeder directory, their “farm” churns out “Bobcat, Lynx, Raccoon, Red Fox, Gray Fox, Arctic Fox, Groundhog, Gray Squirrel, Black Squirrel, Lemurs, High Content Wolfdogs, Coyote, and many more species”  which are sold as “pets” at expos like this one or auctioned off to the highest bidder at their new bi-annual Smoky Mountain Alternative Livestock Auction, which allows unlicensed breeders and brokers from all over the country to consign baby wild cats, newborn primates, and even federally endangered species for auction (more on that later). Currently, Tennessee state law allows both bobcats and lynx to be legally kept as “pets,” with bobcat owners needing a class 2 permit and lynx requiring no permit at all.

The following photos were recently posted by Frazier Farms on Facebook (they let their kids help raise the animals). It seems that they’ve recently started breeding Sand Cats to sell as “pets,” even though they’re a desert species so sensitive to humidity that even most zoos have a hard time keeping them. I can’t help but wonder where their breeding stock came from, since there are virtually no private breeders of Sand Cats and they are heavily poached from the wild for the pet trade. Sadly, the naive public is already clamoring to buy the cats because they’re so “cute.”  In the background of the third picture, notice the rows of kennel cages with taxidermied animal pelts on top.

Crystal Frazier recently posted this photo. Apparently, “responsible pet ownership” entails using a baby bobcat as a selfie prop and then immediately offering to sell it to a random person on Facebook:

This is a photo of Michael Frazier’s fireplace decorated with the carcasses of animals he bred, along with his rude taunting of the “ignorant idiots” who think it’s creepy or digusting. He claims that the animals all died of “natural causes” and that he just had them stuffed to “enjoy them.”

Frazier Farms is USDA licensed as a dealer and breeder with license #63-B-0189. According to this log of FOIA requests,Michael Frazier himself recently requested “copies of the complaints lodged against Frazier Farms Exotics usda number 63-B-0189 From the period February 1, 2018 to present.” Earlier, in July of 2018, a redacted requester — who is almost certainly Frazier — had asked for “Animal Care complaint that was lodge against Frazier Farms Exotics USDA No. 63-B-0189 from the period of February 1, 2018 to present.”  What is he trying to hide?
The Frazier family operates multiple animal-related business ventures — if there’s a way to make money off of the sale and transport of animals, the Fraziers are probably doing it. Besides their main business of breeding and selling exotic “pets” to naive owners, the family also operates the following businesses:

Darrell Frazier’s name can be found in a list of donors for F.A.S.T., an organization which supports the “Big Lick” and opposes anti horse-soring legislation.

In 2014, a federal court order was issued against Justin Jenne, DBA Frazier Farms, for soring a horse. Jenne told the court that the horse was “trained” by wearing aluminum rollers and chains on its feet for at least 5 days per week. APHIS has since banned most of these “action devices”because they’re often used in conjunction with caustic chemicals to cause greater pain to the horse. Jenne was ordered to pay a $2200 fine and was banned from showing horses for one year.

Since the Fraziers are so involved in the exotic animal network, they’ve posted plenty of photos showing the family raising or handling big cat cubs from other breeders. This sickly-looking lion cub is being handled roughly by one of the Frazier children, and there are also a few photos of the Fraziers bottlefeeding cougar cubs, which they don’t breed at their farm. The last photo of the lynx was bred by the Fraziers.

In our opinion, it seems from looking at the Frazier’s Facebook posts that as long as they get paid, they couldn’t care less about who’s buying the animals, why they’re buying them, who’s doing business at their events, or if those businesses are legal or ethical. They appear to view exotic animals as nothing more than “livestock” or “products” to sell and don’t think it should be anyone else’s business what they do with them.
Last summer, Frazier Farms posted a bizarre Facebook rant about being inspected by the USDA, calling it a “waste of taxpayer dollars” and threatening legal action against those who reported them to the USDA. One commenter rightly points out that this isn’t what someone who truly cares about animals would complain about:

The Fraziers rarely try to dissuade impulse buyers who demonstrate very little knowledge about the wild “pets” they’re interested in, nor have they discouraged potentially illegal interstate sales, simply telling buyers to “check their local laws” and acting as if it’s solely the buyer’s responsibility to make sure that a purchase is legal. They don’t seem to care about unethical breeders who set up shop at their expos and auctions because they don’t feel that it’s their responsibility to police them, and are extremely hostile towards anyone who dares question the legitimacy of their vendors. Frazier Farms posted a rude, rambling Facebook comment earlier this week in response to someone who was concerned about a vendor at their expo misleading the public into buying “miniature” pigs (which don’t really exist). They wrote, in part:

“We are obviously NOT the seller and I sure can’t tell you the age by a picture on a pig? We are a show where vendors rent a booth to sell THEIR product and give people like you an opportunity to ASSUME you know everything about their product based on a photo and then you put words to it that was NEVER said or insinuated in the post at all. But we are however glad you stopped by to show exactly the type people animal owners and breeders encounter on a regular basis while simply trying to conduct their business.”
About the “Smokey Mountain Alternative Livestock Auction” and how the Fraziers are knowingly breaking federal law:

Frazier’s Farms’ first “Smokey Mountain Alternative Livestock Auction,” was held in August 2018. It was a major, 2-day event (over 60,000 Facebook views on the event per week) which was held at the Walters State Great Smoky Mountains Expo Center and supposedly licensed by the Tennessee Dept. of Agriculture. Baby bobcats, servals, infant primates, and federally-endangered Scimitar-horned Oryx were openly advertised on the event’s public Facebook page, and who knows what else was sold “under the table.” Some of the animals at the auction were known to have been bred by Frazier Farms, but most come from completely unknown sources who may not have been USDA licensed. The flyer for the auction (attached) falsely claimed that “all animals are sold for food & fiber,” a clause likely put in so that consignees didn’t need to be licensed by the USDA, since under the Animal Welfare Act, “purchases and sales of animals used only for the purposes of food or fiber” are exempt from licensing requirements.

This claim is obviously a blatant lie, since Frazier Farms themselves admitted in a Facebook post that the animals they breed and sell are meant to be “pets,” the flyer says the event is “for exotics enthusiasts,” and the Facebook page for the auction is filled with out-of-state buyers clearly eager to purchase the animals as pets. And last I checked, primates and wildlife aren’t being bred for their wool. :)

Although the auction flyer listed several “requirements” for licensing and humane treatment that animal sellers were to follow, there is little reason to believe that these rules were actually enforced. Several consignment photos from the auction showed birds, lemurs, and infant primates in barren wire cages. Disturbingly, taxidermied wildlife was also available for sale. The following photos were posted on the auction’s Facebook page last year:

Although the auction claimed to be licensed by the Tennessee Dept. of Agriculture, I’m pretty sure that Frazier Farms is breaking federal law by allowing the public to pet and hold their animals despite the fact that they don’t have an exhibitor’s license. Frazier Farms is licensed as a breeder/dealer only and does not hold an exhibitors license. As such, they are not legally  permitted to allow public contact with their animals, and the Fraziers are well aware of this law, as evidenced by these Facebook posts:

However, just before they posted this, there were multiple posts on their Facebook page showing Frazier Farms bringing baby exotics to local events and letting children touch and hold them for “educational purposes”. And their expos and auctions are promoted to the public as a type of “zoo” event where the public is encouraged to come and view the animals at the expo center.If they’re not licensed as an exhibitor, this is a clear, willful violation of the AWA.