I found a sad situation while I was on vacation, and it really bothered me… I don’t know if anything can be done about it, but I know if something CAN be done, you’ll know what to do and how to do it! 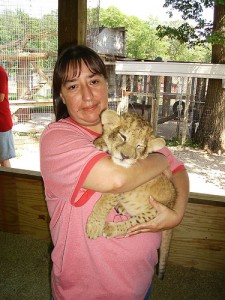 I went on a cruise, and one of the ports was Ensenada, Mexico. When we got off the ship, there was a tiny shopping center – really just a building with one big open room and many stalls selling different junk in each one. Next to the building there was a little structure that was made to look kind of like a tent, although I realized later that it was a wooden building (maybe just plywood) with tent-like coverings on them. There was writing all over the building that indicated that it was related to a “sanctuary” and there were pictures of wild animals on it.

As I looked at the building, kind of trying to figure out what it was, someone walked toward me carrying a picture of herself with a couple of cubs. I went over to check and see what was going on. There were two of them, and they were cute as could be. There was a girl there who spoke excellent English, and she was talking to people, answering questions, and taking money and pictures. There was a guy there who was printing out the pictures she was taking, and then they would put them in this little paper “frames” to give to people.

Standing there listening, I found out that it was $25 to hold one cub, or $35 to hold two (with pictures either way). Someone asked how old the cubs were, and the girl stated that they were about a month old. I’ll be honest – I wanted to hold those cubs. I didn’t even care about the picture… I’ve just always wanted to have a tiger, and I know now that I shouldn’t and won’t, but holding these babies might … help. I don’t know. And plus, I’d been away from my own cats for two weeks, and I just really wanted to hold these babies. But I’ve read all your emails for almost a year, and I know better. I do. But I was almost convinced.

I asked what they do with the cubs when they get big, and the girl was very convincing when she said that they take them to the sanctuary that the people were supporting by paying the money to hold them. She continued on to say that these two cubs had been rejected by their mother, which is why they were taking care of them and using them to raise money for the sanctuary.

When she had taken the cubs away from the person who was holding them when I arrived, she put them in what looked like a crib with a lid on it (a wooden cage on legs, sort of). While she was explaining all about what great work they do, and I was getting more and more sucked into it, someone else handed her some money to hold one of the cubs, and she took one out of the cage. She held it down by the floor so its back feet were just touching the floor. She was holding it under its “arms” and she started bouncing it up and down to wake it up (poor little thing was exhausted).

Right then, I remembered all the things I’ve read about these types of people, and I started crying. I told the person who was with me, “I can’t do this!” and ran away. We went and got on the bus to go into town.

When we got back to the port, the little animal show was closed, but that’s when I realized that the building is permanent. It’s not just set up there for a short time so they can raise money while these poor, rejected babies are young enough to use them – it’s there all the time. I know now that I should have taken some pictures, and I’m sorry I didn’t.

What I keep thinking about is that this little setup is at the port. Cruise ships come in there at least several times a week, if not every day, and each one has thousands of passengers (plus crew). Ours was a relatively small ship, holding just 2,000 passengers. If even 1% of those passengers (20) hold just one cub at $25 each, that’s $500. If you have four cruise ships in a week, that’s $2,000 a week, or $104,000 a year. And I really think these numbers are probably very conservative. I would be willing to bet they’re making at least twice that. Even with expenses, that’s a hell of an income, especially in such a poor country, and especially when they really only have to be there a few hours a week.

As I said in the beginning, I don’t know what, if anything can be done. But I know something needs to be done. Can we petition the government of Mexico to put a stop to it? Can we petition the cruise lines to stop going to Ensenada if they don’t? I understand Ensenada isn’t very far from San Diego … can we get people to drive down on cruise ship days and picket when the ships arrive? Can we post messages on Cruise Critic or other cruise message boards and tell people what’s really going on? (Actually, I might just go post on Cruise Critic anyway…)

I can’t help but think that people in other ports are going to start realizing what a great opportunity this is to make money, and before we know it, this will be going on in ports all over the world. If we can make a big enough stink about it that these people get put out of business, then maybe people in other countries won’t think it’s such a great idea and try to cash in on it.

Thanks for any help or ideas you can give!!  (name withheld to protect identity)

The Mexican government has no interest in stopping this and it will only be if tourism is hindered that they local port may make them move on.   These awful pay-to-play schemes happen in the U.S. too and there are things you can do here to stop it:

Urge malls, fairs, flea markets and other venues to not allow exhibitors to bring baby animals for pay to play schemes. 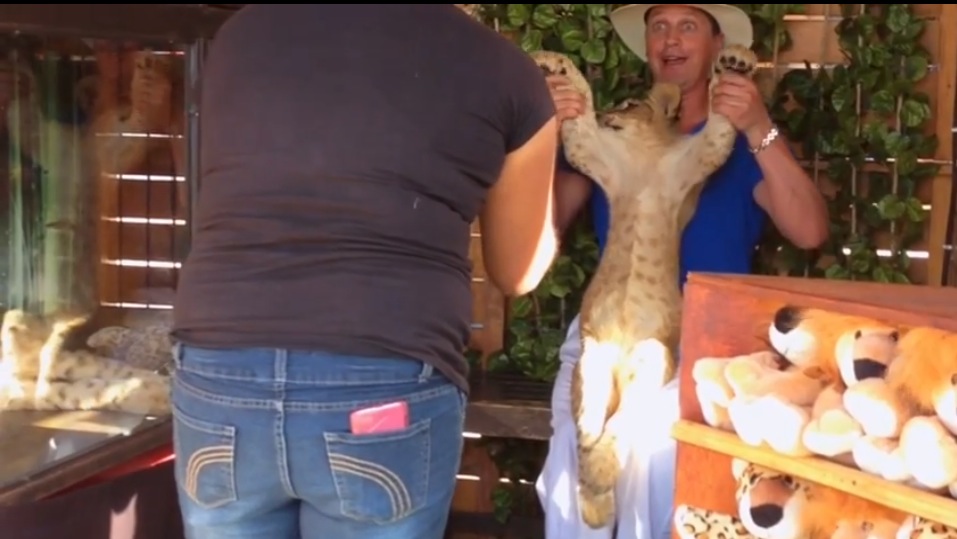