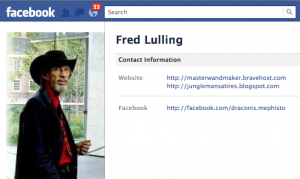 The remaining animals, not including tigers and other large cats, seized in Marion County from Barbara Hoffmann and Fred Lolling were turned over to the Humane Society of Harrison County for placement Friday following a new trial.

A trial de novo was held Friday in the District Courtroom at the Marion County Courthouse to decide if Ms. Hoffman and Lolling, who represented themselves at court, should have their animals returned.

“This court is going to find in favor of the state, which proved a violation of section 821.023 of the health and safety code,” said County Court Judge Phil Parker. The section of code refers to the disposition or return of cruelly treated animals. If the court finds the animal’s owner has cruelly treated the animal, the animal is to go to either public sale or auction or a non-profit animal shelter. “The animals will be placed with the Marion County Humane Society, and ordered, if the Humane Society sells any of the animals, the money is to be returned to the court,” Parker said.

Ms. Hoffman and Lolling left the courtroom quietly as the trial concluded about 4:30 p.m.

“This is a win for the animals. That’s who won here,” said Caroline Wedding, president and founder of the Marion County Humane Society. “They will be placed in the best facilities available.”

Testimony in the de novo trial began at 9 a.m., with a sign language interpreter provided for Lolling, who is deaf.

The video included cramped conditions, and Cox’s testimony included the element of smell, which he said was “pretty strong” and made him cough.

“This is the second trailer with urine and feces all over the floor of the dogs cages. There was no food there, at the time, but it looked like they had been fed,” Cox said as he described scenes from the video.

Animals were also found to be living in cages and crates inside the camper where the couple slept.

“The smell in the camper was quite a bit strong. The ammonia was strong,” said Cox, who described the conditions of the 51 animals cramped inside.

Ms. Hoffman concerned her questioning with issues she believed existed in the process of the Marion County Sheriff’s Department’s execution of the search and seizure warrants. 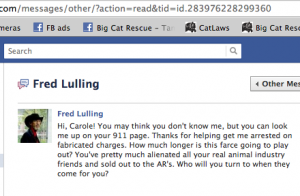 Other witnesses for the county included Deputy David McKnight and veterinarian Carol Hedges, who has had many of the animals in her clinic and kennel since the seizure.

“In general, the cages were dirty, they smelled bad and had to be repaired with tape pretty quickly,” Ms. Hedges said of the removal of the animals from the two semi-trailers and camper.

She also described the smell of the trailers as having a “very high urine-type smell and some other odors I could not identify. It was like a kennel that had not been cleaned in several days.”

Hedges also testified that among others, a miniature horse she treated for a serious case of pleural pneumonia died. An iguana was also found to have mouth rot and later died. Seventy percent of the dogs were found to have heartworms with another 70 percent cross-section having tapeworms and/or hookworms.

She attributed those issues to husbandry problems.

It was calculated during Hedges’ testimony that there had been 141 animals seized. Of those, 121 were smaller animals. The domestic cats were euthenized, due to rampant upper respiratory infections, and the ducks, chickens and turkeys were also euthenized as their origins were unknown, since Ms. Hoffman provided no documentation for them.

In all, 38 of the 121 died either from euthanasia or medical causes, leaving 83 animals still in question during the trial.

Ms. Hoffman was openly grief-stricken over all of the animals’ deaths, and expressed a desire to leave the courtroom as she choked back tears.

“I’m glad you’ve forgiven me for my mistakes,” Ms. Hoffman said to Parker about her lack of experience in conducting herself at court.

She proceeded to give a background of the events and said she was there to prove she was abused as well, many times detailing her arrest and time spent in jail.

“I intend to show I was severely abused through the process,” she said. Though the trial was not about her rights, she continued lines of questioning pertaining to the large cats, the search warrant and other events from the day of the seizure…” More

A hearing is set for 11 a.m. Thursday in Marion County in the animal cruelty case of Barbara Hoffman, 58, and Fred Lulling of Jefferson.

Marion County and state officials seized more than 50 wild, domestic and exotic animals from the couple’s property, 950 Lewis Chapel Road, last Wednesday after receiving a tip about them harboring large cats. Ms. Hoffman, a former circus queen, and Lulling, her business partner, was arrested for six counts of animal cruelty.

“This is a hearing to show (cause) for the JP (justice of the peace) to make a decision on the (disposition) of the animals,” said Caroline Wedding, president of the Humane Society of Marion County. She accompanied the sheriff’s department to last week’s seizure.

“We hope the county and Humane Society will be awarded custody,” she said.

Ms. Wedding said she will present in court a list of animals seized and the current medical conditions that were uncovered after the seizure.

She said one of the dogs, which she took to be groomed, is blind and at least partially deaf. She said the other dogs were basically using him as a urine pad.

“He was skin and bones and so matted,” Ms. Wedding said. “He’s on his way to being much better.” The Humane Society president said several nonprofit organizations and rescue groups are willing to take the animals if they are awarded to the county and the Humane Society…” More

While Caroline Wedding has only been running the Marion County Humane Society for about three years, she has already been on plenty of animal-cruelty raids, and has helped find better homes for hundreds of dogs, cats and exotic birds. Still, she thinks it’s unlikely she will ever come across something like what she encountered last Wednesday, when she accompanied multiple East Texas law enforcement agencies on a raid that will go down in East Texas infamy.

“If you would have told me a few years ago that today I’d be feeding tigers, cougars, and leopards, I never would have believed you,” she tells Hair Balls.

And those are far from the only critters now in her charge. In all, 141 animals were seized when authorities from agencies ranging from everything from the Waskom Police Department Reserves to the Texas Animal Health Commission to the U.S Marshals Office converged on the rural compound of new-in-town former circus performer Barbara Hoffman…” More

Barbara Hoffman vowed last year to pack up and leave Edinburg for a city more appreciative of her menagerie of wild cats and other exotic animals.

Jefferson, Texas — as it turns out — wasn’t that place.

Two weeks after the retired circus performer moved her 60-animal collection into the rural town on the state’s border with Louisiana, authorities seized them all and placed her and her business partner under arrest on charges of animal cruelty.

Now, the fate of six tigers, three black leopards, one cougar, a wallaby, a monkey, and a host of cats, dogs, lizards, turtles and horses lies in a courtroom again.

“It’d be fine if she got all of her licenses,” said Larry Nance, an investigator for the Marion County District Attorney’s Office. “But she just moved in here in the dead of night without the proper permits, and we’re not going to keep pushing this problem down the road.”

In January 2009, Edinburg city officials gave Hoffman, 58, and partner Fred Lulling until the end of the year to remove their animals from an 8-acre tract of land just outside of city limits.

The business partners had failed to register the animals with the city, state or the U.S. Department of Agriculture, and they posed a danger to public safety, a city spokeswoman said at the time. The pair attempted to appeal that decision in court, but their lawsuit was thrown out after a judge found they had not filed it in a timely fashion.

But Hoffman — who toured in a traveling circus act for more than two decades — maintained she was more than capable of caring for such wild beasts and merely wanted to open an educational wildlife preserve for children and Winter Texans. She had previously kept them at the San Benito fairgrounds before Hurricane Dolly made the area unsafe, prompting her move to Hidalgo County…” More

The owner of those exotic animals seized in Marion County is now behind bars herself. Barbara Hoffman is charged with numerous counts of animal cruelty.

In the meantime, the nearly 100 animals seized from her property Wednesday are recovering in county clinics.

“All the big cats are in climate controlled, secured area,” said Caroline Wedding, with the Marion County Humane Society. “This cold weather coming in this weekend, they’re going to be happy babies…we want their lives to be heaven.”

To free them from the filth, Marion County investigators had to cut through the rusted, corroded locks.

“That’s just proof that these animals have been left out in the weather forever…their feet are sore due to the fact that they’re always on their wet floors, due to standing in their own urine,” said Larry Nance, with the Marion County D.A.’s Office.

Now, their cages are clean. Though a temporary home, Marion County says their behavior is improving instantly.

“They’re all just what I call purring…they just lay around and push their feet against you [in a] real playful mood,” said Nance.

Ironically, their owner, Hoffman, is now also behind bars and under a suicide watch. She used to be an animal trainer with her late husband, but records uncover a trail of trouble since his death.

Before moving to Marion County, Hoffman was kicked out of Edinburg, Texas for the same thing: not registering the wild animals. Investigators say she was also denied a USDA license and began hoarding.

“When you’ve got 50 small animals in a camper trailer that smells like 18 years of rotting urine, you’re not taking care of your animals,” said William Gleason, the Marion County District Attorney.

For some of those smaller, domestic cats, it is already too late. Plagued with diseases, some are being euthanized. But, for most, like Hoffman’s prized monkey, it is a fresh start, and, hopefully, a happy ending…” More & video

“We have a warrant to seize the animals and a warrant to search the premises,” said Marion County District Attorney Bill Gleason, adding they were also searching for any carcasses….” More

Tuesday, we told you about wild animals discovered in Marion County living in horrific conditions. The District Attorney’s Office served Barbara Hoffman with a search and seizure warrant Wednesday and we were right there alongside them.

We arrived in Chopper 7 at the area where all the animals were being kept in filthy, cramped conditions. Once we landed, we searched the perimeter with the Marion County D.A.’s office, discovering foul, filthy conditions.

“I’m an ex-circus superstar,” said Hoffman. “This is what we look like when we’re not performing.”

In the trailer were huge snakes, birds without wings, domestic cats caged and even a wallaby. The stench was so strong, you could hardly breathe.

“If you haven’t got a strong stomach you’ll probably lose it,” said Larry Nance. “I mean, the ammonia is so strong it just burns your nose when you walk in. The filth and the smell and then you look at these cats in these cages. They’re not let out to use the restroom at any time.”…” More & video