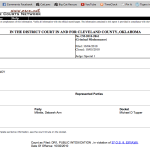 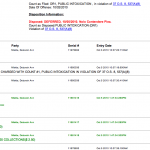 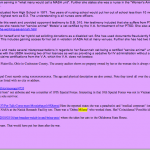 Milette was outed by the POW Network as a fraud yesterday. See; She was at the state house on April 17, 2012 with her hybrid cat which she claimed was “service animal”. Note under ADA only dogs and sometimes minature horses may be service animals.

Further she said she lives in Plainfield, Ohio. Amazing on April 13, 2012 she said on an Atlanta station she lives in Oklahoma? See;

Next she incorporated a cat club in Oklahoma just last November; http://www.bizapedia.com/ok/RED-RIVER-RASCALS-CAT-CLUB.html

Plus she has a conviction from 20 months ago with the same Oklahoma address. See;http://www.oscn.net/applications/oscn/GetCaseInformation.asp?submitted=true&viewtype=caseGeneral&casemasterID=2059363&db=

Cleveland Note they also list a New York State address which is not a good address according to property records and The U.S. Postal service.

Deborah Ann Milette tries to pass off Serval hybrid as a “service animal” in a misguided attempt to thwart an Ohio bill that would call for the regulation of wild animals and their domestic hybrids.

COLUMBUS — Motzie the Savannah cat looks and acts a lot like other home-dwelling felines — only he’s about twice the size and resembles wilder breeds that you might see in a zoo.

Deborah-Ann Milette, a Coshocton County resident and Vietnam veteran who has received certification for Motzie as a service animal, brought the cat to the Statehouse with hopes of convincing lawmakers not to take him away.

She was among more than 100 people who packed a Statehouse committee hearing room for testimony on Senate Bill 310, legislation that would ban the new ownership of certain dangerous, wild animals and institute containment and care requirements for existing owners.

“I would like to see them scrap the bill,” Milette said, adding later, “Tigers are not taught to kill you. They are bottle-fed, hand-raised babies, and they respect their caregivers. They know who feeds them. They’re not going to bite the hand that feeds them. … Zanesville’s putting a panic in people for no reason.”

Tuesday’s hearing was the latest on a bill that would restrict ownership of elephants, hippos, bears, tigers, lions, monkeys and a host of other wild animals, and impose a variety of permitting requirements.

SB 310 also would create separate requirements for varieties of snakes, whose owners could continue to breed and acquire new ones, provided they obtain proper permits and meet other state requirements.

As was the case during a hearing last month, about 40 people offered testimony on the legislation, most of them voicing opposition or urging lawmakers to either toss the entire bill or make changes for specific types of animals.

Lawmakers did make a number of changes to the bill Tuesday, exempting boa constrictors and Savannah cats from its provisions, changing signage requirements for snakes and restricted primates and allowing public contact with elephants as part of certain education programs.

Many on hand Tuesday still oppose the bill, however, including Joe Schreibvogel, president of the U.S. Zoological Association who runs a refuge in Oklahoma that is home to more than 170 lions and tigers.

He said the legislation is being pushed by powerful money interests who stand to benefit financially from the changes.

“They’re fixing to take animals away from private owners and facilities that currently know how to take care of their animals and turn them over to sanctuaries … that are not USDA licensed, closed to the public …,” he said. “You’re asking for trouble.”

The legislation being considered in the Senate was prompted, in part, by an incident in Zanesville in which sheriff’s deputies were forced to kill dozens of wild animals that were let loose by Terry Thompson, their troubled owner. The latter committed suicide.

But Schreibvogel said he believes the Zanesville man was murdered as part of a conspiracy to push a ban on the private ownership of exotic animals in the state.

“I believe that it was a setup to further this agenda,” he said. “There’s no way that man could have ever let all of those animals out of there by cutting their cages apart with bolt cutters and got out of there alive, let alone had the time to do what all the autopsy and police reports said he did.”

Muskingum County Sheriff Matt Lutz, however, said he has no doubts that Thompson killed himself.

“Everything we had from that scene was an indication that he shot himself,” he said.

Lutz is supportive of the legislation moving through the Ohio Senate, which he said could have prevented the Zanesville incident.

Marc Kovac is the Dix Capital Bureau Chief. Email him at mkovac@dixcom.com or on Twitter at OhioCapitalBlog.