He has come to the attention of this site after allegedly buying Fishing cats and Geoffroy cats at the Lolli Brother’s auction for the purpose of breeding and sale.  These fishing cats were offered for sale, on a site Steve Provost frequents, called ExoticAnimalsForSale.net 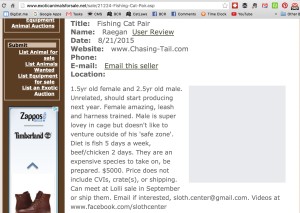 The likely seller was, Kellie Caron Raegan, of Zoological Wildlife Conservation Center located at 74320 Larson Road Ranier, OR, which is a pay to play scheme that charges visitors to handle captive wild animals.

Records can only be found going back to 2012 but in that time Steve Provost has been cited by USDA for filthy piles of manure laden blankets, failure to provide enrichment to primates, failure to provide fencing and safe barricades to protect the animals and the public, and failure to have a responsible adult on property, among others.

Steve Provost is listed as the ring master for the Kifaru exotic animal auction at 10831 South Highway 183 Lampasas, Texas 76550.  Kifaru is owned by Jurgen Schulz who formed J.C. Schulz Inc., an exotic fauna collection firm, one of the nation’s largest exotic animal dealers, in 1975. In addition to Kifaru, which he opened in 1996, he also owns an exotic game ranch (read canned hunt in most cases) in Lampasas. The Schulz family website boasts that they have captured live wild animals to be hunted by the wealthy or used in zoos since  1898.

The “Mutual of Omaha” African shows were actual capture scenes of Jurgen Schulz’s projects. During these days, Jurgen became friends with Mutual’s star, Jim Fowler. (You thought you were watching wild animals get vet care, but in fact you were watching animals being stolen from their families, and their homes, to be shot in cages, or held prisoners for the rest of their lives) In later years, the two opened a zoo together near Washington D.C.

In the 1980’s Schulz purchased the Catskill Game Farm in Catskill, New York and founded a company called Camelids of Delaware who imported llamas and alpacas from Bolivia, Chile and Peru; Poitou Donkeys from France, and Boer goats from New Zealand and South Africa.

In 1992 Schulz moved to Texas and soon thereafter purchased the Kifaru Exotic Animal Auction where the Schulz Family Legacy of animal exploitation continues today with the help of people like Steve Provost.

On several occasions, the farm was cited by federal inspectors for things like exposing animals to “significant injury hazards” and failing to provide medical care to a lame giraffe and an injured elephant.

The farm also came under fire from the San Francisco Zoo and the Toronto Zoo, which stopped doing business with the game farm because, officials at those zoos said, they had discovered that it was selling animals to canned hunt operations in Texas.

Inspection records from the Texas Animal Health Commission show that about 150 animals including zebra, deer and bison were shipped to Texas from the game farm between 2001 and 2004.

Where those animals ended up once they entered Texas is unclear, but records show that only five camels and two zebras were later shipped out of the Texas.

Don Elroy, the director of Wildlife Advocacy for the Humane Society of the United States, said it was no mystery where the rest of those animals went. “They are invariably going to canned hunts,” he said.