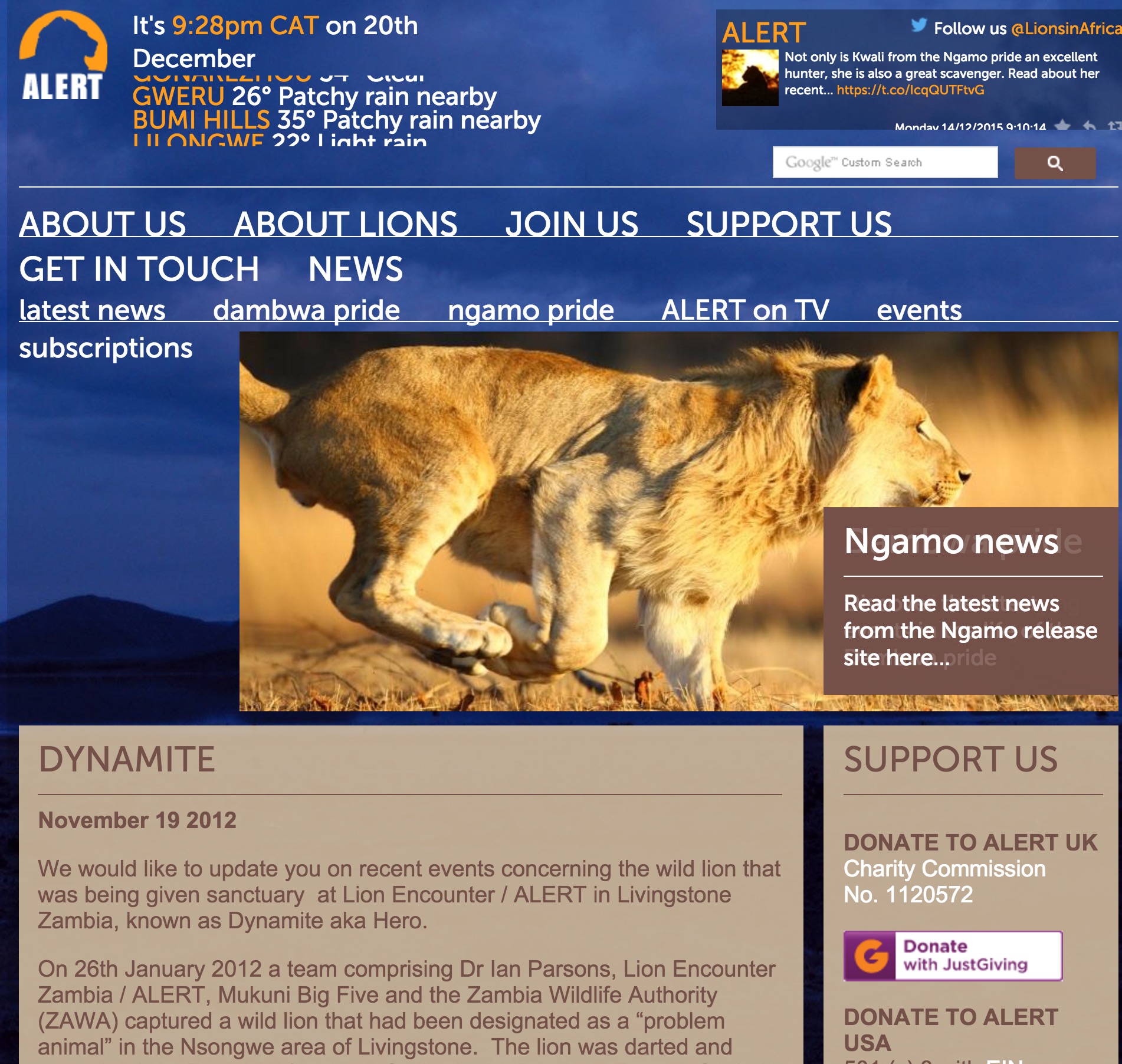 ALERT which is an acronym for something like African Lion Environment … (I can’t find it on their outdated website) first came up on our radar in Dec 2015 when we were told that Animal Planet had aired yet another bogus show that claimed to be real conservation but seems to be nothing more than a series long advertisement for a lion pay to play scheme.

The show, called Roaring With Pride, filmed in 2013 – 2014 by Godunnit Productions proclaimed that it was a series that followed the release of captive bred lions back into the wild.

I knew right then it was going to be a lie, since there have been no successful captive breeding programs for big cats who have then been released into the wild.  The only ones you hear of are the entertainment – disguised – as – science shows that air on Animal Planet and History channel.

Anyone who knows anything about rehab and release of wild animals knows that the very first rule is to limit human contact because if big cats feel comfortable around people, then they don’t mind walking up to the school bus stop for a snack, or wandering into barns, farms, etc. That is what gets them (and those in their path) killed.  The idiocy of a show that claims you can:

is just beyond belief.  The sad part is that people want to believe it, and television caters to the lowest common denominator.

Knowing this place had to be bad, or ill conceived at the best, this is what I’ve learned.

ALERT’s website has a story dated 2012 on its main page, which would indicate that it isn’t updated very often.  See screen shot below.

It used to be that tourism sites would promote these pay to play schemes, but now it is so commonly known that there is no legitimate way to play with cubs and then send them to the wild.  In fact, what the real documentaries and investigators have found is that these cubs usually end up being sold into canned hunts where they are shot in fenced areas for a hefty fee.

Zambia Tourism initially had lion walks as an activity to experience, but after they brought in a reporter to look into ALERT further, they changed their offerings.  Learn more here http://www.zambiatourism.com/activities/adventure/lion-walks

It appears that ALERT bought many of their lions from some of the canned hunt facilities.  Most people will say they started off with good intentions, but to our knowledge they haven’t released or even gone passed stage stage 2 of 4 in their release program.  In the show they boast that the lions have been released into the “wild” but then they further describe that as being 400 acres.  That isn’t even one square mile.  It’s no where near enough space for the cats to survive, which is evidenced by the fact that they have to keep rounding up zebra, giraffes and other hoofstock for the cats to kill.

So far no one has caught ALERT selling lions, but they are still breeding, which is ridiculous, given the lack of space, resources or any long term plan for cats who will never be released to the real wild. Using their lions in walks with people ensures that they will never be candidates for release.
https://www.environment.gov.za/sites/default/files/question957.pdf

The documents at the above link provide evidence from the South African Minister of Water and Environmental Affairs from 2012 confirming that:

Richard Leach, General Manager at Lion Encounter Zambia, was the named importer of 7 lions from Boschput Game Farm in South Africa under a CITES export permit dated 23 December 2010 (which lions are listed as having been exported to ALERT Zambia’s address at Melrose Farm);

Andrew Connolly, Director of ALERT, Lion Encounter Zambia and Antelope Park (where ALERT is based in Zimbabwe) was the named importer of 10 lions from Myburgh Farm in South Africa under a CITES export permit dated 3 October 2008. ALERT / LION ENCOUNTER ZAMBIA’S SUPPLIERS.

Horseback Africa are believed to speed breed and exploit captive bred lions to the extent that 2 of those sourced by ALERT and / or Lion Encounter Zambia subsequently had to be put down. http://safaritalk.net/topic/7535-press-release-from-lion-encounter-zambia/

ALERT apparently ‘…expressed concern over the purpose for which this particular operation is breeding lions as well as the welfare conditions of the lions at that operation’ (above Safaritalk link). This, however, would seem to be contradicted by their partner’s imports from that operation.

Boschput Game Farm breed lions for sale and, from their lions for sale page, given that those pictured are all adult males who would be prized as trophies, it seems entirely possible that they could also be selling lions for canned hunts.

Myburgh Farm describes itself as a lion ‘farm’ on its website and is also heavily involved in the exploitation of captive bred lions for cub petting and photo ops.

ALERT, Lion Encounter Zambia and Mukuni Big 5 safaris all worked together to capture an unfortunate, genuinely wild, male lion who happened to stray too near to their operations early in 2012. http://zambezitraveller.com/livingstone/conservation/livingstone-lion-–-diary-his-capture

Unfortunately it seems this lion, named ‘Dynamite’ who is still the subject of their main web page as of Dec 2015, subsequently died in transit (http://www.lionalert.org/article/217) from Lion Encounter Zambia.

So, to sum up, what we have here is official Parliamentary evidence of 29 lions sourced by ALERT / Lion Encounter Zambia (same staff, same lions and evidence of transfer of lions and funds between the two in the public domain) from three separate unethical South African lion breeding operations between October 2008 and December 2010. ie from the canned hunting industry.

I sat down with Andrew (Connolly of Antelope Park/ALERT) in Leeds in 2012 and explained my concerns about the lack of progress and constant production of cubs for the walking programmes. He told me it was their only form of income to bring the lions to the future stages, but acknowledged there was a huge bottleneck.

I can assure you that the lions are not being sold for canned hunts. But the continuous accumulation of lions is worrisome.

So make of this what you will. It may well be that the project started with honest intentions, but it was doomed to fail for a number of reasons. Think about it – they are breeding cubs that are going nowhere.

Assuming 50% males, most of whom will become surplus males even if all the goals of the project were met (they won’t be) what will become of the ‘surplus males’?  Well you surely do not need that spelled out, do you?

Finally, if I have not convinced you, you could approach Dr Luke Hunter at Panthera to obtain a copy of the scientific report that concludes that such a project has no conservation value.” 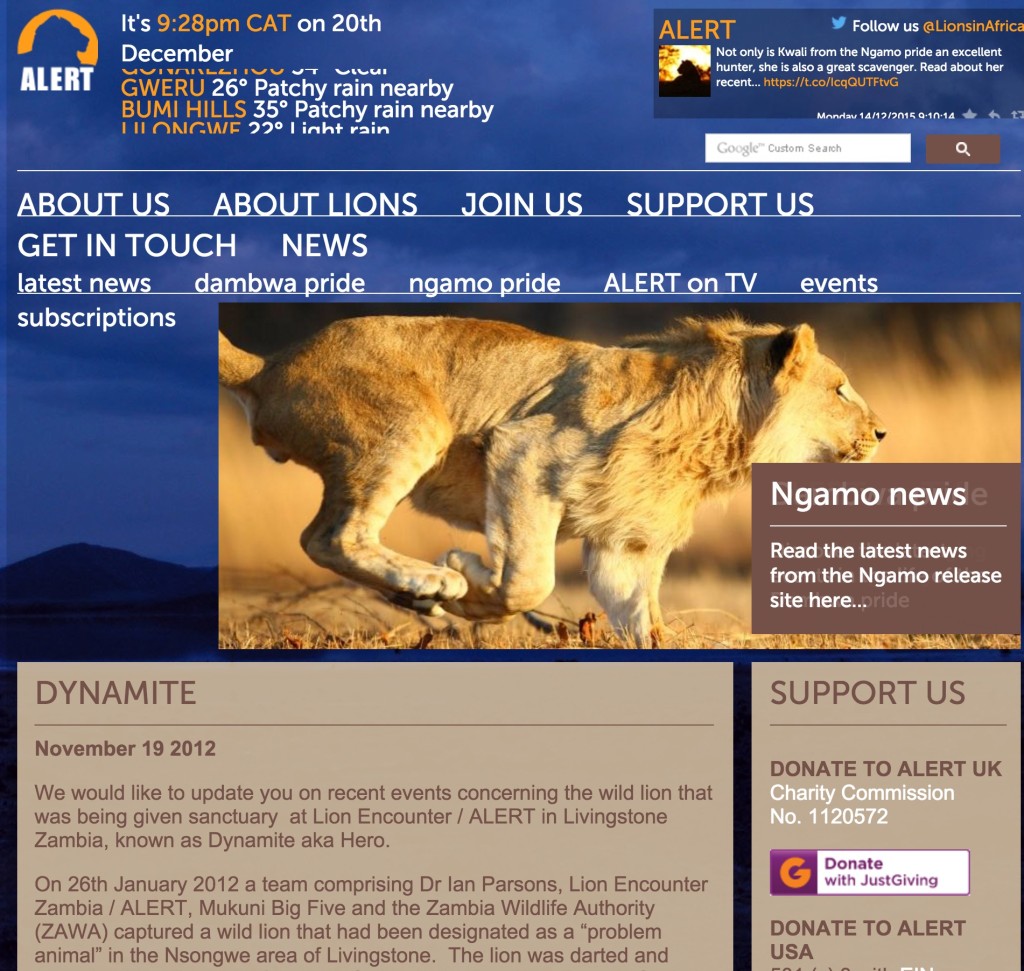