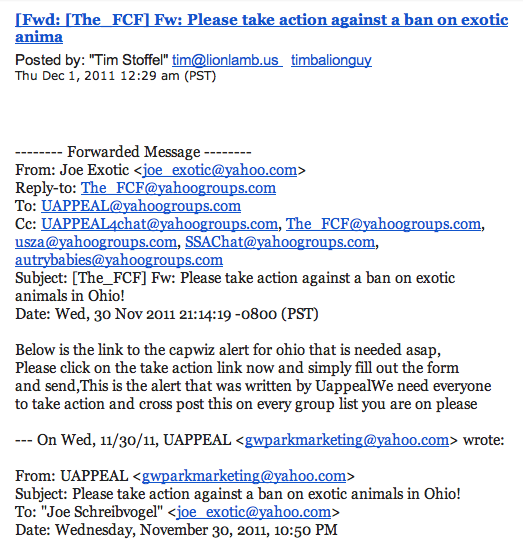 Formerly known as the Long Island Ocelot Club, little has changed in this group since the 60’s as they still promote the breeding and keeping of exotic cats as pets and are working hard to stop laws that would protect the cats. The following is excerpted from the Phoenix Exotics Group where they cross posted their upcoming event:

The full convention starts on Thursday evening with the icebreaker
appetizer and cocktail hour, followed by the membership meeting. Arrive
early and visit with members and their kittens.

Friday, July 25 be enthralled with a special tour to T.I.G.E.R.S. (The
Institute for Greatly Endangered and Rare Species), the home facility of
Bhagavan (Doc) Antle, known for breeding Ligers and White Tigers for photo booths.

Convention registration fee is $200 per person until June 28. Call
Hilton’s Myrtle Beach Kingston Plantation at 1-800-876-0010 to reserve a
villa. The special FCF Convention Villa rate is $225 for 2 bedrooms. The
cut off for villa registration is June 28, 2008. Contact Carolyne
Clendinden, membership services at
membershipservices@… to see about possible villa
sharing. For more information on the convention and hotel, contact Kevin
Chambers, FCF Convention Chairman, at treasurer@…

Bonus:
On the Wednesday before the opening of convention, FCF will hold its
famous Wild Feline Husbandry Course. This course is held throughout the
year nationwide but here’s your chance to attend the course and
convention at the same time. $95 for non-members.
ses/july_23_2008_husbandry_
course.htm

This press release issued by Joe Schreibvogel about the Feline Conservation Federation and Lynn Culver exposes their thinly veiled attempts to fool the public into thinking they provide a needed service. Joe is no stranger to controversy though and the Internet abounds with undercover video of the suffering his cats have endured including a lioness with her arm chewed off by tigers and no vet care. He claims to have “re-homed” 22 tigers into a cage that cost 21,000, but a decent cage for one tiger costs 7500.00. Visit in person, get behind the scenes to see how the cats are really kept, and then decide. This press release is just the pot calling the kettle black.

/24-7PressRelease/ – Wynnewood, Oklahoma, September 08, 2008 – The Florida incorporated organization Feline Conservation Federation, better known as the FCF, finds itself in a whirl wind of controversy.
Recently, there was an incident at the Wesa-Ah-Gee-Ah Sanctuary in Warrenton, Missouri where a worker lost his leg below the knee due to the injuries he received from the escape of a tiger at the sanctuary. Joe Schreibvogel, of the GW Exotic Animal Park in Wyneewood, OK offered to spearhead the rehoming effort of the animals after the Wesa-Ah-Gee-Ah Sanctuary decided to shut their doors. Schreibvogel contacted Lynn Culver, President of the Feline Conservation Federation for help in the rehoming of these animals and asked for assistance from the FCF’s Safety Net Fund. This program was set up from donations for aiding individuals who are in the process of rehoming felines and helps to cover the costs for transportation and enclosures. Ms. Culver ignored Mr. Schreibvogel’s request and said “The Safety Net Fund is set up to work by various members taking the lead – writing a web page about the case on the FCF Safety Net page, providing details that FCF is taking on the project. I am not going to do it. As president, my main concern is getting the expected services to the members. With this increase growth rate, more than ever, I have my work cut out for me. We have a production timetable to meet on the next Journal, and the upcoming elections to conduct, the change over to a single membership renewal date, the recent MO tiger attacks and related media needs. On a personal level, my 45 cats and 12 kittens to care for. And I might add, I recently underwent surgery and had fell asleep at the wheel and ran my car off the road and it is now being repaired. I am a bit overwhelmed right now and I work at least 6 hours a day on FCF stuff for no pay. It is time for the other board members to step up to the plate and do their jobs. I have told them I will support and aid them in this effort and I have laid out a plan for them – but they must take the first step.”

Due to the lack of interest from the FCF in this rehoming project, Mr. Schreibvogal took the project on by himself and spent more that $21,500 of his own money to build enclosures and pay for the transportation costs to bring 22 of the Wesa-Ah-Gee-Ah animals to his GW Exotic Animal Park. He then found homes for the remaining animals and helped those who took in these animals to make preparations for their arrival.

A week after the rehoming of the animals from Warrenton, Mr. Schreibvogel started getting emails relating to the Warrenton situation and he found one that was most disturbing. A woman out of Arkansas sent this email on August 31, 2008 to Mr. Schreibvogel that said “I got a desperate call from someone who attends church with Sandra (owner of Wesa-Ah-Gee-Ah) wanting help in placing these cats. Because I was so busy with school, work, and a new baby, I contacted Lynn Culver. I figured as president of the FCF, she should help or at least put Sandra in touch with someone who could. Apparently FCF did nothing. That was months ago. If Lynn had not ignored the situation, that accident could have been prevented and that boy would still have his leg. Just another example of FCF offering all kinds of help to owners, and providing none.” Could the tiger incident have been prevented if the FCF had taken action when they were first made aware of the problem?

All of the animals in Warrenton were placed without the FCF (Feline Conservation Federation) ever stepping up to the plate. Joe Schreibvogel states “with or without their help we want law makers to know there are responsible, fair, people out here being professional who will step up and make sure cases like this do not get dumped in the laps of the states or just ignored. We just want the chance to have a voice when laws are written so as to protect the professionals in this industry because some of us do care about the cats and the public safety.”

Schreibvogal says he is puzzled by all of the misinformation in the media about the incident that caused the injury to the worker at the sanctuary. One report indicated the cage was 17 feet tall when in fact it was only 10 feet tall. “They are making these animals sound much more dangerous than they are, and this tiger was in a poorly constructed cage. Tigers don’t make a habit of just climbing out to get out. There are always factors behind any incident.” Schreibvogel stated that this was indeed a sad accident but he was told by an eye witness at the scene of the accident that the tiger was provoked by a volunteer at the top of the cage who taunted the tiger with a piece of chicken which gave this tiger the incentive to climb up the side of the cage. Schreibvogel said “There are already regulations in place in Missouri to cover the ownership of animals and if they are not followed things like this can happen. Missouri doesn’t need any new laws, they just need to enforce the ones they already have in place.” The FCF has now had complaints filed against them for fraud of selling memberships with advantages and than removing certain privileges as they see fit with no refunds offered to people buying memberships. The creditability of the registered feline handlers cards they also sell is under scrutiny as one member puts it a kangaroo could sign up for this, it’s not about professionalism its about $30.00. In the last month one board member has resigned, and over 30 memberships have been either suspended or revoked due to people questioning the ethics of the Organization.

All information contained in this article was through direct dated emails, or personal conversations with the people involved.

Joe Schreibvogel of G.W. Exotics is not someone who should be slinging mud at anyone.  See why HERE